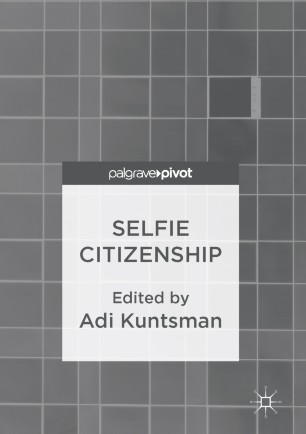 This collection refl ects on the emerging phenomenon of ‘selfi e citizenship’, which capitalises on individual visibility and agency, at the time when citizenship itself is increasingly governed through biometrics and large-scale dataisation. Today we are witnessing a global rise of politicised selfi es: photographs of individuals with handwritten notes or banners, various selfi e memes and hashtag actions, spread on social media in actions of protest or social mobilistion. Contributions in this collection range from discussions of citizen engagement, to political campaigning, to selfi es as forms of citizen witnessing, to selfi es without a face. The chapters cover uses of selfi es by activists, tourists and politicians, victims and survivors, adults and children, in a broad range of geopolitical locations – China, Germany, Iran, Nepal, Pakistan, Singapore, South Korea, Sweden, the UK and the US. Written by an international and interdisciplinary group of authors, from senior professors to junior scholars, artists, graduate students and activists, the book is aimed at students, researchers, and media practitioners.
Adi Kuntsman is Senior Lecturer at Manchester Metropolitan University, UK, the author of Digital Militarism: Israel’s Occupation in the Social Media Age (with Rebecca L. Stein, 2015), and the co-editor of Queer Necropolitics (with Jin Haritaworn and Silvia Posocco, 2014) and Digital Cultures and the Politics of Emotion: Feelings, Affect and Technologica Change (with Athina Karatzogianni, 2012).