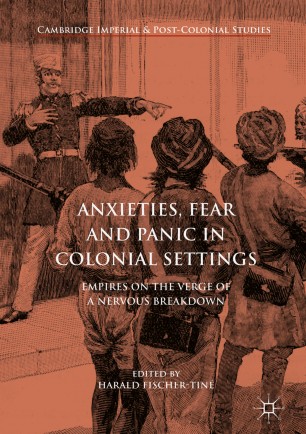 Empires on the Verge of a Nervous Breakdown

This book argues that the history of colonial empires has been shaped to a considerable extent by negative emotions such as anxiety, fear and embarrassment as well as by the regular occurrence of panics. The case studies it assembles examine the various ways in which panics and anxieties were generated in imperial situations and how they shook up the dynamics between seemingly all-powerful colonizers and the apparently defenceless colonized. Drawing from examples of the British, Dutch and German colonial experience, the volume sketches out some of the main areas (such as disease, native ‘savagery’ or sexual transgression) that generated panics or created anxieties in colonial settings and analyses the most common varieties of practical, discursive and epistemic strategies adopted by the colonisers to curb the perceived threats.

Harald Fischer-Tiné is Professor of Modern Global History at the Swiss Federal Institute of Technology in Zurich (ETH Zürich), Switzerland. Previous to his appointment in Zurich he taught at Jacobs University, Bremen, Humboldt-University, Berlin and the University of Heidelberg. He has published extensively on South Asian colonial history, the history of the British Empire and global history. His most recent monograph is the biography of an Indian revolutionary in European exile: Shyamji Krishnavarma: Sanskrit, Sociology and Anti-Imperialism (2014)