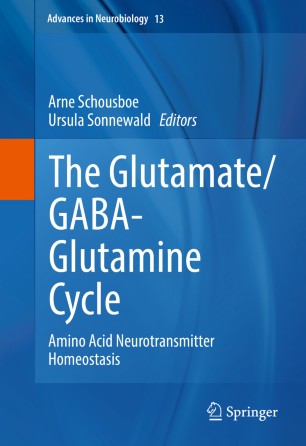 Part of the Advances in Neurobiology book series (NEUROBIOL, volume 13)

Fundamental biochemical studies of basic brain metabolism focusing on the neuroactive amino acids glutamate and GABA combined with the seminal observation that one of the key enzymes, glutamine synthetase is localized in astroglial cells but not in neurons resulted in the formulation of the term “The Glutamate-Glutamine Cycle.” In this cycle glutamate released from neurons is taken up by surrounding astrocytes, amidated by the action of glutamine synthetase to glutamine which can be transferred back to the neurons. The conversion of glutamate to glutamine is like a stealth technology, hiding the glutamate molecule which would be highly toxic to neurons due to its excitotoxic action. This series of reactions require the concerted and precise interaction of a number of enzymes and plasma membrane transporters, and this volume provides in-depth descriptions of these processes. Obviously such a series of complicated reactions may well be prone to malfunction and therefore neurological diseases are likely to be associated with such malfunction of the enzymes and transporters involved in the cycle. These aspects are also discussed in several chapters of the book.
A number of leading experts in neuroscience including intermediary metabolism, enzymology and transporter physiology have contributed to this book which provides comprehensive discussions of these different aspects of the functional importance of the glutamate-glutamine cycle coupling homeostasis of glutamatergic, excitatory neurotransmission to basic aspects of brain energy metabolism. This book will be of particular importance for students as well as professionals interested in these fundamental processes involved in brain function and dysfunction.