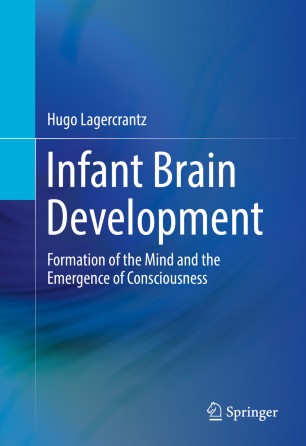 Formation of the Mind and the Emergence of Consciousness

This book discusses the main milestones of early brain development and the emergence of consciousness, within and outside the mother’s environment, with a particular focus on the preterm infant. These insights offer new perspectives on issues concerning fetal pain, awareness in newborns, and the effects of current digital media on the developing infant brain.

Among the topics covered:

Infant Brain Development is an excellent resource for researchers, clinicians and related professionals, and graduate students across a variety of disciplines including developmental psychology, pediatrics, neurobiology, neuroscience, obstetrics, nursing and medical ethics. It is written with historic and philosophical remarks of interest for a broad readership.

“This book is a joy to read for anyone interested in understanding where biology is heading in the 21st century, and it is essential for those who work in child development.”
Eric Kandel, University Professor, Columbia University, Co-Director, Mortimer B. Zuckerman Mind Brain Behavior Institute, Nobel Laureate in Medicine 2000

"With the precision of a scientist, the depth of a philosopher, and the heart and sensitivity of a pediatrician, Hugo Lagercrantz weaves a story as readable and engrossing as any mystery novel, linking brain, genes, the environment, and behavior to explain the development of the mind of a newborn. A tour de force!"
Patricia K. Kuhl, The Bezos Family Foundation Endowed Chair in Early Childhood Learning, Co-Director, Institute for Learning Brain Sciences, University of Washington

“This book is a noble and valiant effort by Dr. Lagercrantz to explain the immensely complex issue of normal and pathological development of the human brain in simple terms that are accessible to the general public.”
Pasko Rakic, Duberg Professor of Neuroscience and Neurology, Yale University School of Medicine

Hugo Lagercrantz, M.D., Ph.D. Drhc, is Senior Professor of Pediatrics at the Karolinska Institute, Stockholm, Sweden and Editor-in-chief of Acta Paediatrica. He is also a honorary member of the American Pediatric Society. He was formerly the Director of the Neonatal Programme at the Astrid Lindgren Children´s Hospital. He has been a member of the Nobel Assembly, Chairman of the Swedish Pediatric Society and European Society for Pediatric Research. He has published more than 200 peer-reviewed scientific papers and edited 7 books on topics such as respiratory physiology and neonatal neurology. He discovered the remarkably high levels of stress hormones in babies at birth (i.e. the stress of being born). Together with collaborators, he demonstrated high spontaneous brain activity in newborns, possibly corresponding to the “stream of consciousness”.

“The book gives an up-to-date account of the formation and development of the human brain arriving at the complicated question of the emergence of consciousness. … The book is richly illustrated with diagrams, photos … tables and classic illustrations – such as the beautiful original drawings of Ramon y Cajal. … It is a joy to read this book.” (Ingemar Kjellmer, Acta Paediatrica, Vol. 107 (1), January, 2018)

“Lagercrantz’s book on infant brain development is a pleasure to read for its style and substance. … His book is likely to be of greatest interest to neuropsychologists and neuroscientists, particularly those on internal review boards evaluating pre- and perinatal research, and child or developmental psychologists. … Overall, readers with an interest in the topic are likely to find the book as entertaining as professionally substantial.” (Nadia Webb, PsycCRITIQUES, Vol. 62 (16), April, 2017)

“This book introduces the reader to the neuroscience of the developing brain in a way that is accessible to clinicians. … book was a pleasure to read from cover to cover and is written in a first person, conversational style with many anecdotes about the lives of key neuroscientists and the personal involvement of the author in much of the research. Crucially, extensive referencing enables the reader to go much deeper into briefly covered, but complex, subjects. Highly recommended.” (Andrew Whitelaw, Acta Pædiatrica, 2017)
Buy options