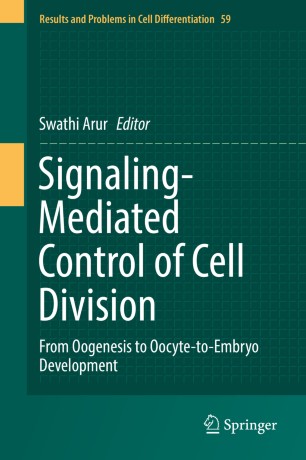 From Oogenesis to Oocyte-to-Embryo Development

Part of the Results and Problems in Cell Differentiation book series (RESULTS, volume 59)

This volume covers the current knowledge base on the role of signaling and environmental pathways that control the normal development of germline stem cells, meiotic progression of oocytes, events of oocyte maturation and fertilization, and the birth of an embryo.
Germ cells are uniquely poised to sustain life across generations through the fusion of oocyte and sperm. Because of the central importance of germ cells to life, much work has been dedicated to obtaining a clear understanding of the molecular and signaling events that control their formation and maintenance. Germ cells are set aside from somatic cells in the embryo and go through specialized meiotic cell cycles as the animal matures. These cell cycles are interspersed with long periods of arrest. In human females, meiosis I is initiated in the fetus. At birth, oocytes are arrested in meiosis I; after puberty, every month an oocyte initiates meiosis II – ovulation. Upon sperm availability these cells are fertilized, generate an embryo, and the cycle-of-life continues. During meiotic I progression and arrest, the fitness of oocytes and their progeny are likely influenced by environmental cues and signaling pathways.
A lot of recent work has focused on understanding the mechanisms that regulate oocyte fitness and quality in humans and vertebrates. Much of our understanding on the events of meiosis I and germline stem cell populations comes from work in invertebrates, wherein the germline stem cells produce oocytes continuously through adult development. In both inverbrates and vertebrates nutritional and signaling pathways control the regulation of stem cells in such a manner so as to couple production of gametes with the nutritional availability. Additionally, mature oocytes arrest both in meiosis I and meiosis II, and signaling and nutritional pathways have been shown to regulate their formation, and maintenance, such that despite long periods of arrest, the oocyte quality is assured and errors in chromosome segregation and varied cytoplasmic events are minimal.