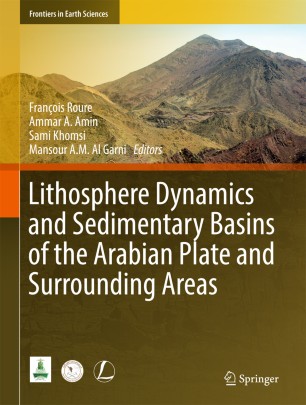 Part of the Frontiers in Earth Sciences book series (FRONTIERS)

This book focuses on the links between deep earth (mantle) and shallow processes in areas of active tectonics in the Arabian Plate and Surrounding Areas. It also provides key information for energy resources in these areas. The book is a compilation of selected papers from the Task Force of the International Lithosphere Program (ILP). It comprises a set of research studies from the Middle East, North Africa and the Mediterranean domain focusing on (1) the architecture, geodynamic evolution and modelling of the Red Sea rift system and its surroundings, and tectonics and sedimentation in the Gulf of Corinth, (2) the crustal architecture and georesources of the North Algerian Offshore, (3) Reservoirs, aquifers and fluid transfers in Saudi Basins, Petroleum systems and salt tectonics in Yemen and (4) Cretaceous-Eocene foreland inversions in Saudi Arabia.

François Roure: A Doctor of Structural Geology (1984, Paris VI), a professor and member of the Scientific Board of the French Petroleum Institute. He is also Extraordinary Professor of the IFP at the VU Amsterdam University (2004-2014). Having joined CNRS in 1980, François Roure joined IFP Energies Nouvelles in 1984 as a project manager, became “Emirates” project manager in 2002 and manager of the JIP Tell-Offshore project (North Algeria Petroleum Reassessment with Sonatrach, Repsol-YPF and CNPC) in 2005. Since 2000, François Roure has been Professor and Expert at the French Petroleum Institute.

François Roure is the author of more than one hundred publications and communications. His scientific coordination work at the IFP is extensive, supervising many theses there. François Roure received the Charles Jacob prize from the Académie des Sciences (1996), the AAPG European Distinguished Lecturer award (1997) and the EAGE Wegener prize (2010).

Ammar Amin, professor of Geological Hazards got his Phd at East Anglia University, U.K. August 1994. Since 2010, he works as a Dean of the faculty of Earth Sciences, King Abdulaziz University (KAU) , Jeddah, Saudi Arabia. During his career in KAU he had involved in several administrative and academic positions. He worked as vice dean for development, vice dean for postgraduate studies, head of geoengineering department, KAU Supervisor General of the Co-supervision of Graduate Studies, Chairman of KAU central laboratories.  Currently in addition to his responsibility as a dean , he is a member of several important committees such as KAU Scientific Council and KAU Council.Prof. Ammar collaborated with major institutions within Saudi Arabia and the globe on earth sciences studies, academic development, accreditation, scientific donations, communities services programs, e-learning and female Co-supervision of Graduate Studies.He has also experience in Engineering Geology for roads, bridges, dams, tunnels, environmental regulations and evaluate disaster plans, environmental geological hazards and cracks resulting from the melting of ground limestone.

Sami Khomsi got his Phd at Tunis University in 2004 and his HDR (Habilitation à Diriger des Recherches) in the same university in 2015. Since 2011, he works in the Department of petroleum geology and sedimentology, in the faculty of Earth Sciences, King Abdulaziz University, Jeddah, Saudi Arabia. He worked also in different universities in Tunisia and France. Past employment within academia (research and teaching) and industry in the upstream activities: exploration, sites survey, prospects evaluation and professional expert training (field trip leader for professionals, coaching of geoscientists...) in basin analysis involving basin modeling, structural analysis and balanced cross sections. Sami collaborated with major oil companies in Eastern Maghreb on field studies, structural analysis of fold-thrust structures, subsurface reservoir characterisations and seismic interpretations. He has also experience in geophysical methods involving fast processing and interpretation of seismic reflexion sections in terms of structural geology-investigation- evaluation of plays, characterization of fractured reservoirs and subsurface mapping.

Prof. Dr. Mansour A. M. Al-Garni: received a BS (1993) in geophysics from King Abdulaziz University (KAU), Saudi Arabia, an MS (1996) in geophysics from Colorado School of Mines (CSM), Golden, Colorado, United States, and a PhD (2001) in geophysics from Texas A&M University (TAMU), College Station, Texas, United States.  In 1993, he worked as a geophysicist at the Ministry of Petroleum and Mineral Resources, United States Geological Survey, Jeddah, Saudi Arabia, and as a demonstrator of geophysics at KAU, where in 2002 he became an assistant professor of geophysics. He has been promoted to an associate professor of geophysics in 2006 and promoted to a full professor of geophysics in 2010. Furthermore, he has been assigned as the chairman of geophysics department (2003-2011), vice dean (2014), and vice dean for graduate studies and scientific research (2015-Now).   His research interests are controlled-source electromagnetic induction, electrical methods, gravity and magnetic methods, near-surface applied geophysics, forward and inverse modeling, environmental & engineering geophysics, environmental site characterization, ground penetrating radar, hydrogeophysics, and mining geophysics: theory, data processing and interpretation. Prof. Al-Garni has reviewed a lot of academic works and has been in many committees including those of M.Sc and Ph.D examinations.  His remarkable efforts in the establishment and development of various projects were reflected in valuable academic and professional successes and achievements.  He has conducted more than 15 research projects, the most recent of which involved EM, DC resistivity, SP, IP, and magnetic methods for mineral exploration in the Arabian Shield.  He has published more than 50 research articles in international indexed and refereed journals. In 2015, Prof. Al-Garni joined the AJGS as Associate Editor responsible for evaluating submission in the fields of theoretical and Applied exploration geophysics.  Prof. Al-Garni has been listed in the "Marquis Who's Who in the World" as one of the world's foremost acheivers in the field of geophysics in the 28th Edition (2011).