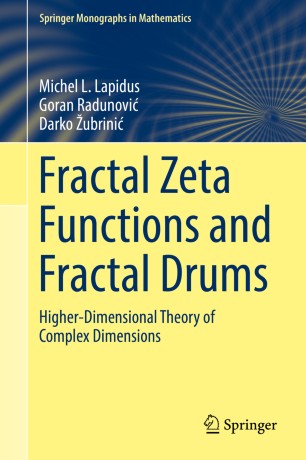 This monograph gives a state-of-the-art and accessible treatment of a new general higher-dimensional theory of complex dimensions, valid for arbitrary bounded subsets of Euclidean spaces, as well as for their natural generalization, relative fractal drums. It provides a significant extension of the existing theory of zeta functions for fractal strings to fractal sets and arbitrary bounded sets in Euclidean spaces of any dimension. Two new classes of fractal zeta functions are introduced, namely, the distance and tube zeta functions of bounded sets, and their key properties are investigated. The theory is developed step-by-step at a slow pace, and every step is well motivated by numerous examples, historical remarks and comments, relating the objects under investigation to other concepts. Special emphasis is placed on the study of complex dimensions of bounded sets and their connections with the notions of Minkowski content and Minkowski measurability, as well as on fractal tube formulas. It is shown for the first time that essential singularities of fractal zeta functions can naturally emerge for various classes of fractal sets and have a significant geometric effect. The theory developed in this book leads naturally to a new definition of fractality, expressed in terms of the existence of underlying geometric oscillations or, equivalently, in terms of the existence of nonreal complex dimensions.
The connections to previous extensive work of the first author and his collaborators on geometric zeta functions of fractal strings are clearly explained. Many concepts are discussed for the first time, making the book a rich source of new thoughts and ideas to be developed further. The book contains a large number of open problems and describes many possible directions for further research. The beginning chapters may be used as a part of a course on fractal geometry. The primary readership is aimed at graduate students and researchers working in Fractal Geometry and other related fields, such as Complex Analysis, Dynamical Systems, Geometric Measure Theory, Harmonic Analysis, Mathematical Physics, Analytic Number Theory and the Spectral Theory of Elliptic Differential Operators. The book should be accessible to nonexperts and newcomers to the field.