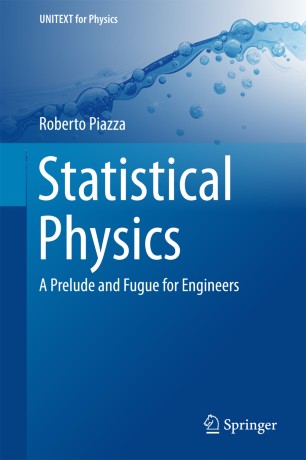 A Prelude and Fugue for Engineers

This book, provides a general introduction to the ideas and methods of statistical mechanics with the principal aim of meeting the needs of Master’s students in chemical, mechanical, and materials science engineering. Extensive introductory information is presented on many general physics topics in which students in engineering are inadequately trained, ranging from the Hamiltonian formulation of classical mechanics to basic quantum mechanics, electromagnetic fields in matter, intermolecular forces, and transport phenomena. Since engineers should be able to apply physical concepts, the book also focuses on the practical applications of statistical physics to material science and to cutting-edge technologies, with brief but informative sections on, for example, interfacial properties, disperse systems, nucleation, magnetic materials, superfluidity, and ultralow temperature technologies. The book adopts a graded approach to learning, the opening four basic-level chapters being followed by advanced “starred” sections in which special topics are discussed. Its relatively informal style, including the use of musical metaphors to guide the reader through the text, will aid self-learning.

Roberto Piazza has been Full Professor in Condensed Matter Physics at the Politecnico di Milano since 2005 and has also been invited professor at the École Normale Supérieure in Lyon (2011), Leverhulme professor in Cambridge (2013), and Debye professor at Utrecht University (2015). He obtained a Master’s degree in Physics from the University of Milan and a PhD in Quantum Electronics from the University of Pavia, with V. Degiorgio as advisor. After having worked with W. Goldburg at the University of Pittsburgh, he became first a lecturer in Pavia and then Reader at the Politecnico di Milano. He is currently section editor of the Journal of Physics Condensed Matter for liquids, soft matter, and biological physics, and a member of the European Space Sciences Committee of the European Science Foundation (ESF). His research activity, mostly devoted to the experimental study of soft matter and complex fluids, has covered topics ranging from colloidal suspensions to surfactant and protein solutions. The results of these studies have been the subject of about 100 papers published in international peer-reviewed journals. He is also author of the popular book Soft Matter, published by Springer in Italian, English, and Chinese.

“The colloquial style of the entire book, full of wit and humour, shows how one of the most exciting and important parts of physics can be conveyed (played) in the form of a divertimento, without being less rigorous and thorough than needed: a lesson for smart students and young professors training in the difficult art of teaching.” (Giorgio Benedek, Il Nuovo Saggiatore, Vol. 35 (5-6), 2019)
“The book is billed as a text that will meet the needs of graduate students in chemical, mechanical, and materials science engineering, and it succeeds in that objective. … Piazza’s book is a welcome addition to the statistical-physics canon. … Piazza’s choice of material and his lucid presentation of abstract, sometimes difficult concepts will make for instructive and enjoyable reading.” (Eldred Chimowitz, Physics Today, October, 2017)
Buy options