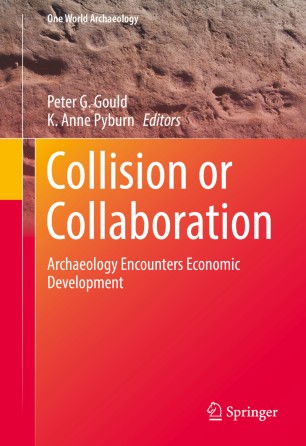 Archaeology has an often contentious relationship with the consequences of economic development. Tourism, urban development and natural resource exploitation have generated adverse impact on the archaeological record, indigenous cultures and local communities worldwide.  Over the decades, international conventions, national laws and corporate ventures have sought to address the problems, but too often they have fallen short and immense challenges remain. Looking ahead, the contributions to this volume constitute a global conversation on the most salient issue facing archaeology as it interacts with economic development: Is collision with development still the best course? Or, is a more effective strategy to pursue collaborative relationships with the forces of economic and social change?

Peter G. Gould is a Consulting Scholar at the Penn Cultural Heritage Center of the University of Pennsylvania Museum of Archaeology and Anthropology and is an Adjunct Professor of Archaeology at the American University of Rome.  After a career as an economist and business executive, he received his Ph.D. from the Institute of Archaeology, University College London (UK), where he is also an Honorary Lecturer.  His research focuses on the governance and management of economic development projects associated with heritage sites.  He is actively engaged with several non-profit organizations involved in archaeology and heritage.

K. Anne Pyburn is Provost Professor of Anthropology at Indiana University, where she also teaches in the areas of Central Eurasian Studies and Gender Studies.  She also has been Director of the Chou Hiix Project (Belize) since 1990, and the co-Director of the Community Museums in Kyrgyzstan project since 2009.  She is the Vice President of the World Archaeological Congress and General Editor of the One World Archaeology publication series.  A winner of numerous teaching awards and research fellowships, she has published numerous books and articles on meso-American archaeology, the ethics and practice of archaeology, and other topics in archaeology.  She holds a Ph.D. in Anthropology from the University of Arizona.