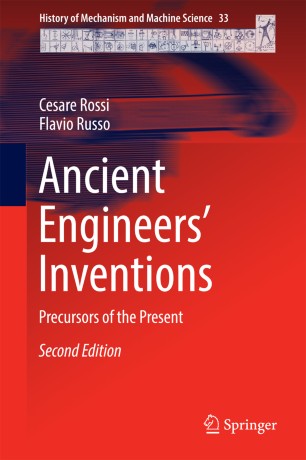 Precursors of the Present

Part of the History of Mechanism and Machine Science book series (HMMS, volume 33)

This book describes the inventions and designs of ancient engineers who are the precursors of the present. The period ranges mainly from 300 B.C. to 1600 A.D. with several exceptions. Many of the oldest inventions are documented by archaeological finds, often very little known, mainly from Pompeii, Herculaneum and Stabiae and reveal a surprising modernity in their conception.

Most of the inventions presented in the first four parts of the book were conceived up to the late Roman Empire and may be considered as milestones, each in their respective field. The fifth part concentrates on more recent centuries. The sixth part deals with some building construction techniques.

Generally, for each of the presented inventions, three elements of research and reference are provided: written documents (the classics), iconic references (coins, bas-reliefs, etc.) and archaeological findings.

The authors did not write this book for engineers only; hence they describe all the devices without assuming wide technical knowledge. The authors’ main aim is to try to communicate their enthusiasm for the inventions and the inventors of the past and to contribute to the fascinating study of the History of Engineering.

This second edition includes new topics and chapters that are of special interest to engineers.

He participated in many International Conferences, often with invited lectures and as Chairman. His research activities where carried on mainly in the topics of Tribology, Rotor Dynamics, Mechanical Vibrations, Chaotic Motions of Mechanical Systems, Robot Mechanics, Video Applications for Robotics. Since several years he is interested in studies and researches on the History of Engineering and presently he cooperates with researchers (also on the field) mainly in which the Classic Age is concerned. He is a member of the A.I.S.I (Italian Society for the History of Engineering).

Flavio Russo holds a degree in Mining Engineering from the University of Rome.

Has been studying military architecture and military history in general for the past thirty years, focusing especially on military technology. For ten years he was member of Scientific Councils of the Italian Institute for the Castles and of National Committee for Studies of Fortified Architectures at the Italian Cultural Heritage Department.

Currently he is working at the reconstruction of a roman water wheel, starting from archaeological finds.

“The book is well illustrated with both black-and-white and color drawings and photographs. … this book will appeal to individuals interested in the histories of both mechanical engineering and civil engineering. It is recommended to those who are also interested in ancient Greek and Roman technologies. Summing Up: Recommended. Upper-division undergraduates and above; faculty and professionals.” (A. M. Strauss, Choice, Vol. 54 (9), May, 2017)
Buy options