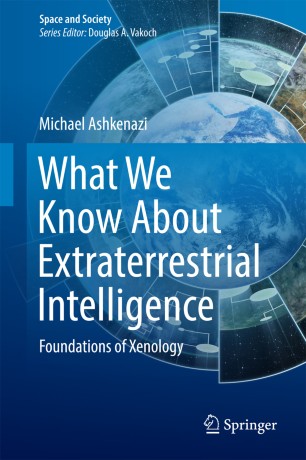 What We Know About Extraterrestrial Intelligence

Part of the Space and Society book series (SPSO)

Have you ever wondered what could happen when we discover another communicating species outside the Earth? This book addresses this question in all its complexity.  In addition to the physical barriers for communication, such as the enormous distances where a message can take centuries to reach its recipient, the book also examines the biological problems of communicating between species, the problems of identifying a non-Terrestrial intelligence, and the ethical, religious, legal and other problems of conducting discussions across light years.

Most of the book is concerned with issues that could impinge on your life: how do we share experiences with ETI? Can we make shared laws? Could we trade? Would they have religion? The book addresses these and related issues, identifying potential barriers to communication and suggesting ways we can overcome them. The book explores this topic through reference to human experience, through analogy and thought experiment, while relying on what is known to-date about ourselves, our world, and the cosmos we live in.

Michael Ashkenazi has been a practicing anthropologist since graduating from Yale University (PhD 1983) with a wide and eclectic range of interests. He is currently a senior researcher and project leader at the Bonn International Center for Conversion, a German independent think-tank dealing in security, peace, and development.  Before joining BICC he spent twenty years as a university lecturer, teaching under- and post-graduates in Japan, Israel, Canada, and the UK. He has written and co-edited several books. He has conducted and directed fieldwork in China, East Timor, Ghana, Guinea-Bissau, Israel, Japan, Liberia, Mali, and South Sudan.

Dr Ashkenazi has written extensively about subjects as diverse as Japanese food culture, religion and ritual, peace operations, small arms control, and SETI. He has been a member of the NASA Cultural Aspects of SETI multi-year workshop, and visiting researcher at NASA Ames SETI project. He has also conducted field research and published on human reactions to SETI.