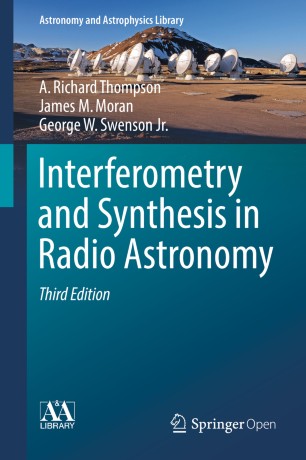 Interferometry and Synthesis in Radio Astronomy

This book is open access under a CC BY-NC 4.0 license.

The third edition of this indispensable book in radio interferometry provides extensive updates to the second edition, including results and technical advances from the past decade; discussion of arrays that now span the full range of the radio part of the electromagnetic spectrum observable from the ground, 10 MHz to 1 THz; an analysis of factors that affect array speed; and an expanded discussion of digital signal-processing techniques and of scintillation phenomena and the effects of atmospheric water vapor on image distortion, among many other topics.

With its comprehensiveness and detailed exposition of all aspects of the theory and practice of radio interferometry and synthesis imaging, this book has established itself as a standard reference in the field. It begins with an overview of the basic principles of radio astronomy, a short history of the development of radio interferometry, and an elementary discussion of the operation of an interferometer. From this foundation, it delves into the underlying relationships of interferometry, sets forth the coordinate systems and parameters to describe synthesis imaging, and examines configurations of antennas for multielement synthesis arrays. Various aspects of the design and response of receiving systems are discussed, as well as the special requirements of very-long-baseline interferometry (VLBI), image reconstruction, and recent developments in image enhancement techniques and astrometric observations. Also discussed are propagation effects in the media between the source and the observer, and radio interference, factors that limit performance. Related techniques are introduced, including intensity interferometry, optical interferometry, lunar occultations, tracking of satellites in Earth orbit, interferometry for remote Earth sensing, and holographic measurements of antenna surfaces.

This book will benefit anyone who is interested in radio interferometry techniques for astronomy, astrometry, geodesy, or electrical engineering.

A. Richard Thompson received his PhD in physics in 1956 from the University of Manchester, England. As a graduate student at the Jodrell Bank Experimental Station, he developed a radio interferometer for measurement of angular widths of radio sources. In 1956–1957 he worked with EMI Electronics, in the United Kingdom, on missile guidance and telemetry. He then joined the staff of Harvard College Observatory as a research associate in 1961–1962, working on solar studies at the Harvard Radio Astronomy Station, Fort Davis, Texas. In 1962 he joined the electrical engineering department of Stanford University as a radio astronomer, and as a senior research associate in 1970–1972. In 1973 he joined the National Radio Astronomy Observatory (NRAO) and with the Very Large Array (VLA) project, served as systems engineer, head of electronics, and deputy project manager. During 1984–1992 he worked on the Very Long Baseline Array project as systems engineer and deputy manager. Beginning in 1992 he was assistant head of the NRAO Central Development Lab and retired in 1999. He is currently an emeritus scientist at NRAO. Thompson was also active in frequency coordination for radio astronomy, and in 1978–1998 he was a member of US Study Group 7 of the International Telecommunication Union. He was a member of the Committee on Radio Frequencies of the National Academy of Sciences in 1980–1991. During 1982–1988 he was secretary of the Interunion Commission for Allocation of Frequencies for Radio Astronomy and Space Sciences. He is a member of the International Union of Radio Science, Commission 40 of the International Astrophysical Union, and the American Astronomical Society (AAS). He is a Fellow of the Institute of Electrical and Electronic Engineers (IEEE).

James M. Moran received his PhD in electrical engineering from the Massachusetts Institute of Technology in 1968, where his thesis involved the development of spectral line capability for very-long-baseline interferometry (VLBI). He is the Donald H. Menzel Professor of Astrophysics, emeritus, at Harvard University and senior radio astronomer at the Smithsonian Astrophysical Observatory. He taught courses in radio astronomy and data analysis for more than 40 years and served as the chair of Harvard's astronomy department during 2006–2011. He was the project director for the Submillimeter Array, a pathfinder for the Atacama Large Millimeter/submillimeter Array, during its construction phase, in 1995–2004. He shared the Rumford Prize of the American Academy of Arts and Sciences in 1971 for his role in the development of VLBI, and he was the recipient of the Newton Lacy Pierce Prize of the AAS in 1978. He was the Jansky Lecturer at NRAO in 1996 and received the Grote Reber Gold Medal from the Grote Reber Foundation in 2013 for his lifetime contributions to the development of radio astronomy. He is a member of the National Academy of Sciences and a Fellow of the IEEE. His principal astronomical research interest is in cosmic masers associated with galactic star-forming regions and with active galactic nuclei. He is also a collaborator on the Event Horizon Telescope, which will image the black hole in the Galactic Center at submillimeter wavelengths.

George W. Swenson Jr. received his PhD in electrical engineering from the University of Wisconsin at Madison in 1951 for the development of an analog computer for a class of multidimensional partial differential equations. He is professor emeritus of electrical engineering and of astronomy at the University of Illinois at Urbana-Champaign. He was manager of the VLA design project at NRAO from 1964 to 1968, during which time the basic design of the instrument was developed and the proposal to the National Science Foundation was prepared. Working at the University of Illinois from 1956 until his retirement in 1988, he established a radio astronomy research program, for which he designed and built two very large, innovative radio telescopes, and a program on the morphology of the ionosphere, for which he and his students designed a full complement of instrumentation, including four orbiting radio beacons that were launched by the US Air Force. He taught a wide range of electrical engineering subjects, supervised graduate thesis research, and served different terms as director of the Vermilion River Observatory and as head of both of his academic departments. He is a member of the AAS and the National Academy of Engineering, a Fellow of the IEEE, and a Guggenheim Fellow.

“The authors of the book under review here to present a comprehensive discussion of the principles and applications of ‘Interferometry and Synthesis in Radio Astronomy.’  … the book delivers a comprehensive treatment of all aspects of interferometry and synthesis in a lucid and flowing tale that is a pleasure to read. The historical notes that are scattered throughout the text add flavor to the reading. … For all working in this field, the book is invaluable.” (Jacob W. M. Baars, The Radio Science Bulletin, Issue 361, June, 2017)
PDF
EPUB