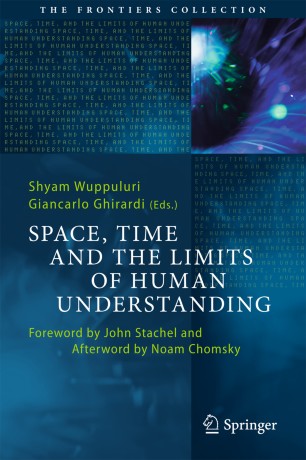 Space, Time and the Limits of Human Understanding

In this compendium of essays, some of the world’s leading thinkers discuss their conceptions of space and time, as viewed through the lens of their own discipline. With an epilogue on the limits of human understanding, this volume hosts contributions from six or more diverse fields. It presumes only rudimentary background knowledge on the part of the reader.

Time and again, through the prism of intellect, humans have tried to diffract reality into various distinct, yet seamless, atomic, yet holistic, independent, yet interrelated disciplines and have attempted to study it contextually. Philosophers debate the paradoxes, or engage in meditations, dialogues and reflections on the content and nature of space and time. Physicists, too, have been trying to mold space and time to fit their notions concerning micro- and macro-worlds. Mathematicians focus on the abstract aspects of space, time and measurement. While cognitive scientists ponder over the perceptual and experiential facets of our consciousness of space and time, computer scientists theoretically and practically try to optimize the space-time complexities in storing and retrieving data/information. The list is never-ending. Linguists, logicians, artists, evolutionary biologists, geographers etc., all are trying to weave a web of understanding around the same duo. However, our endeavour into a world of such endless imagination is restrained by intellectual dilemmas such as: Can humans comprehend everything? Are there any limits? Can finite thought fathom infinity?

We have sought far and wide among the best minds to furnish articles that provide an overview of the above topics. We hope that, through this journey, a symphony of patterns and tapestry of intuitions will emerge, providing the reader with insights into the questions: What is Space? What is Time?

Chapter [15] of this book is available open access under a CC BY 4.0 license.

Shyam Wuppuluri is an independent researcher working in the domain of foundations of science. His research interests range from philosophy to theoretical physics, mathematics and cognitive science. He is the recipient of Honra ao Mérito from the Brazilian Academy of Philosophy (Academia Brasileira de Filosofia) and has been a corresponding member of the academy since 2018. He is also the recipient of the prestigious Albert Einstein Fellowship 2020 from the Einstein Forum at Potsdam & Caputh and is a fellow of Royal Society of Arts. He is the instigating editor of several highly interdisciplinary volumes that disseminate and discuss issues underlying the foundations of sciences, and for which he has gathered the world's leading scientists and intellectuals as contributors; among them Noam Chomsky, Sir Roger Penrose, Sir Martin Rees, Daniel Dennett, A. C. Grayling, Nicholas Humphrey, Gregory Chaitin, Gerard 't Hooft, Ian Stewart, Barry Mazur, Stephen Wolfram, Paul Davies, Tyler Burge, Doron Swade, Julian Barbour, Newton Da Costa, Francisco Antonio Doria, Reuben Hersh, Nicholas Maxwell and many others.

GianCarlo Ghirardi served as the director of Theoretical physics at University of Trieste for more than two decades. He is now the President of the Consortium for Physics of the University of Trieste and Consultant and Member of the Academic Board of the ICTP, Trieste. GianCarlo made important contributions to the foundations of quantum mechanics, particularly through the GRW interpretation, proposed jointly with Rimini and Weber. He has authored many articles and books, and organized many conferences. An intellectual leader, he is a recipient of many honors, accolades and international awards.