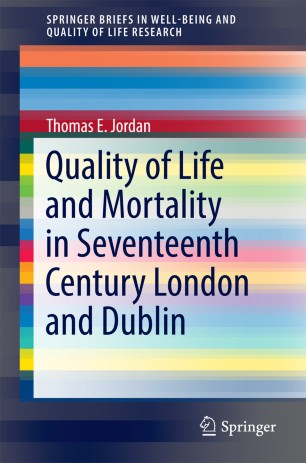 Quality of Life and Mortality in Seventeenth Century London and Dublin

This book provides an examination of the quantitative and qualitative factors affecting mortality in two major cities of the British Isles: London and Dublin. It covers a scale from individuals mentioned by name to aggregates of mortality data in the Bills of Mortality. Focusing on the Seventeenth Century, the book pays attention to the Great Plague of 1665, and to earlier years in which epidemics decimated populations.
To the average person living in the seventeenth century, life was a series of challenges. Mortality among the young was high, and for those who survived early childhood, death in their fifties was fairly typical. Men and women might aspire to a longer life span, but even the healthiest practices were no guarantee when the overall quality of life was low. With fatal illnesses exemplified by typhoid fever on the one hand, and the arrival of yersinia pestis – plague through ports on the Mediterranean at regular intervals of several years, on the other, mortality became a foreseeable event.