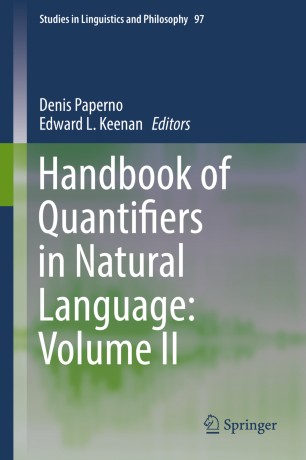 Part of the Studies in Linguistics and Philosophy book series (SLAP, volume 97)

This work presents the structure, distribution and semantic interpretation of quantificational expressions in languages from diverse language families and typological profiles. The current volume pays special attention to underrepresented languages of different status and endangerment level. Languages covered include American and Russian Sign Languages, and sixteen spoken languages from Africa, Australia, Papua, the Americas, and different parts of Asia.  The articles respond to a questionnaire the editors constructed to enable detailed crosslinguistic comparison of numerous features. They offer comparable information on semantic classes of quantifiers (generalized existential, generalized universal, proportional, partitive), syntactically complex quantifiers (intensive modification, Boolean compounds, exception phrases, etc.), and several more specific issues such as quantifier scope ambiguities, floating quantifiers, and binary (type 2) quantifiers.  The book is intended for semanticists, logicians interested in quantification in natural language, and general linguists as articles are meant to be descriptive and theory independent.  The book continues and expands the coverage of the Handbook of Quantifiers in Natural Language (2012) by the same editors, and extends the earlier work in Matthewson (2008), Gil et al. (2013) and Bach et al (1995).

Denis Paperno is a postdoctoral scholar in the Language, Interaction and Computation Laboratory at the University of Trento. He received his PhD in Linguistics from the University of California at Los Angeles in 2012 for a thesis on The Syntax and the Semantics of Non Standard Coordination. His interests include various areas of linguistics, including field linguistics, formal semantics, and computational linguistics. He has published a descriptive grammar of the Beng language (Mande; Côte d'Ivoire).
Edward L. Keenan is Distinguished Professor of linguistics at the University of California at Los Angeles. He received his PhD in Formal Linguistics from The University of Pennsylvania in 1969 for a thesis on A Presupposition Logic for Natural Language. He is a member of the American Academy of Arts and Sciences as well as the American Association for the Advancement of Science. He has published in numerous areas of linguistics, including syntactic typology, formal semantics, theoretical syntax, historical syntax, and Austronesian linguistics. He has coauthored two books: Boolean Semantics for Natural Language (1985), with Leonard Faltz, and Bare Grammar: Lectures on Linguistic Invariants, with Edward P. Stabler (2003). In 2015 he was awarded the S.-Y. Kuroda prize Mathematics of Language.