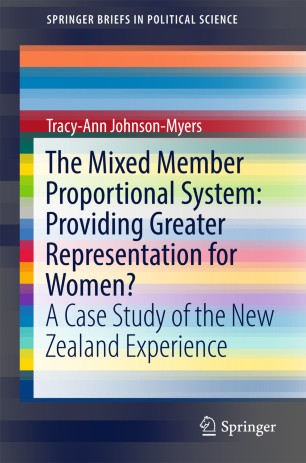 A Case Study of the New Zealand Experience

This Brief discusses the adoption of the mixed member proportional (MMP) electoral system in New Zealand and its subsequent effect on representation for women. Concerns about the homogeneity of the legislature under the Single Member Plurality electoral system and the need for increased representativeness and greater proportionality of party preference lead to the changeover in 1996. The book addresses the question of whether an increase in descriptive representation for women in New Zealand’s House of Representatives has translated to policy outcomes that are beneficial to them. It also examines the extent to which female MPs meet the expectation that they will act for members of their groups; pushing minority and gender-friendly legislation and policies into the political arena. Finally, it raises questions about where women are found in New Zealand’s decision making bodies and what influence they might have on policy outcomes. The first book to examine the effects of the MMP system on female descriptive and substantive representation using a case study analysis, this Brief adds to the literature on electoral systems and women’s political representation. This book will be of use to political science students at both the undergraduate and graduate level, particularly those interested in electoral studies, political institutions, politics and gender, and minority representation.