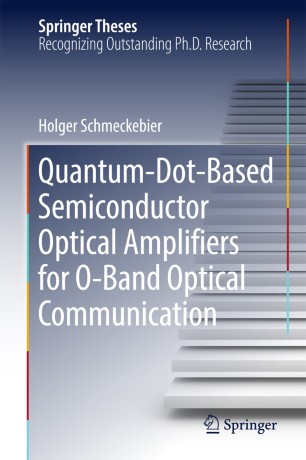 This thesis examines the unique properties of gallium arsenide (GaAs)-based quantum-dot semiconductor optical amplifiers for optical communication networks, introducing readers to their fundamentals, basic parameters and manifold applications. The static and dynamic properties of these amplifiers are discussed extensively in comparison to conventional, non quantum-dot based amplifiers, and their unique advantages are elaborated on, such as the fast carrier dynamics and the decoupling of gain and phase dynamics.
In addition to diverse amplification scenarios involving single and multiple high symbol rate amplitude and phase-coded data signals, wide-range wavelength conversion as a key functionality for optical signal processing is investigated and discussed in detail. Furthermore, two novel device concepts are developed and demonstrated that have the potential to significantly simplify network architectures, reducing the investment and maintenance costs as well as the energy consumption of future networks.

Holger Schmeckebier obtained his Diploma degree in physics in 2009 from the Technical University of Berlin, having worked on mode-locked lasers for optical communication applications. He received his Dr. rer. nat. in 2016 from the TU Berlin. His scientific interest is in the area of static and dynamic characterization of semiconductor edge and surface emitters, linear and nonlinear applications of semiconductor optical amplifiers as well as optical communication experiments at high symbol rates.