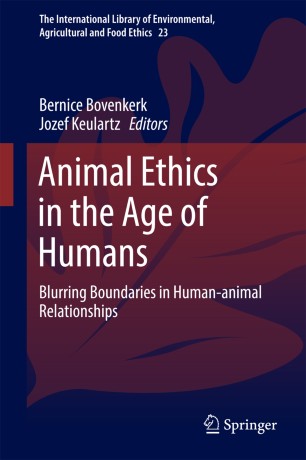 Animal Ethics in the Age of Humans

Part of the The International Library of Environmental, Agricultural and Food Ethics book series (LEAF, volume 23)

This book provides reflection on the increasingly blurry boundaries that characterize the human-animal relationship. In the Anthropocene humans and animals have come closer together and this asks for rethinking old divisions. Firstly, new scientific insights and technological advances lead to a blurring of the boundaries between animals and humans. Secondly, our increasing influence on nature leads to a rethinking of the old distinction between individual animal ethics and collectivist environmental ethics. Thirdly, ongoing urbanization and destruction of animal habitats leads to a blurring between the categories of wild and domesticated animals. Finally, globalization and global climate change have led to the fragmentation of natural habitats, blurring the old distinction between in situ and ex situ conservation. In this book, researchers at the cutting edge of their fields systematically examine the broad field of human-animal relations, dealing with wild, liminal, and domestic animals, with conservation, and zoos, and with technologies such as biomimicry. This book is timely in that it explores the new directions in which our thinking about the human-animal relationship are developing. While the target audience primarily consists of animal studies scholars, coming from a wide range of disciplines including philosophy, sociology, psychology, ethology, literature, and film studies, many of the topics that are discussed have relevance beyond a purely theoretical one; as such the book also aims to inspire for example biologists, conservationists, and zoo keepers to reflect on their relationship with animals.

Dr. Bernice Bovenkerk is assistant professor at the Philosophy Group at Wageningen University. Previously she was post-doc and lecturer at the Ethics Institute at Utrecht University. She received her PhD from the University of Melbourne, Australia, on a dissertation titled The Biotechnology Debate. Democracy in the face of intractable disagreement (which she published with Springer). She received her Master’s title at the University of Amsterdam on a thesis titled Pluralism in Environmental Ethics. Bernice Bovenkerk is currently working on an Innovative Research Grant about the ethics of animal domestication. She has recently carried out research about the moral status  and welfare of fish. Her research interests concern issues in animal and environmental ethics and political philosophy. Current topics are the moral status of animals and other natural entities, climate ethics, and deliberative democracy.