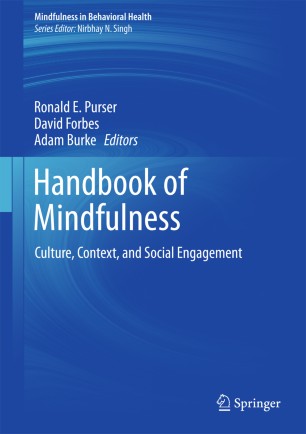 Part of the Mindfulness in Behavioral Health book series (MIBH)

This handbook explores mindfulness philosophy and practice as it functions in today’s socioeconomic, cultural, and political landscape. Chapters discuss the many ways in which classic concepts and practices of mindfulness clash, converge, and influence modern theories and methods, and vice versa. Experts across many disciplines address the secularization and commercialization of Buddhist concepts, the medicalizing of mindfulness in therapies, and progressive uses of mindfulness in education. The book addresses the rise of the, “mindfulness movement”, and the core concerns behind the critiques of the growing popularity of mindfulness. It covers a range of dichotomies, such as traditional versus modern, religious versus secular, and commodification versus critical thought and probes beyond the East/West binary to larger questions of economics, philosophy, ethics, and, ultimately, meaning.
Featured topics include:
The Handbook of Mindfulness is a must-have resource for clinical psychologists, complementary and alternative medicine professionals/practitioners, neuroscientists, and educational and business/management leaders and policymakers as well as related mental health, medical, and educational professionals/practitioners.

Ronald E. Purser, Ph.D., is a Professor of Management at San Francisco State University where he has taught the in the MBA and undergraduate business programs, as well in the doctoral program in the College of Education. Prior to his current appointment, he was an Associate Professor of Organization Development at Loyola University of Chicago. His recent research has been exploring the challenges and issues of introducing mindfulness into secular contexts, particularly critical perspectives of mindfulness in corporate settings. Author and co-editor of five books, including 24/7: Time and Temporality in the Network Society (Stanford University Press, 2007). He sits on the editorial board of the Mindfulness journal, as well as the executive board of the Consciousness, Mindfulness and Compassion (CMC) International Association. A student and Buddhist practitioner since 1981, he was recently ordained as a Dharma instructor in the Korean Zen Buddhist Taego order. His article “Beyond McMindfulness” (with David Loy) in the Huffington Post went viral in 2013.
David Forbes, Ph.D., (U.C. Berkeley), LMHC, is Associate Professor in the School Counseling program in the School of Education at Brooklyn College/CUNY and affiliate faculty in the Urban Education doctoral program at the CUNY Graduate Center. He was a co-recipient of a program grant from the Center for Contemplative Mind in Society and wrote Boyz 2 Buddhas: Counseling Urban High School Male Athletes in the Zone (Peter Lang, 2004) about counseling and teaching mindfulness meditation to a Brooklyn high school football team.  Forbes teaches critical and integral approaches to mindfulness. He writes on the social and cultural context of mindfulness in education and wrote “Occupy Mindfulness” and "Search Outside Yourself: Google Misses a Lesson in Wisdom 101” with Ron Purser. He consults with schools in New York on developing integral mindfulness programs and practices meditation with a group from the New York Insight Meditation Center.‬‬ ‬‬‬‬‬‬‬‬‬
Adam Burke, Ph.D., M.P.H., is a Professor in Health Education and Director of the Institute for Holistic Health Studies at San Francisco State University. He holds advanced degrees in the social/behavioral sciences from UCLA and UC Santa Cruz, and is a licensed acupuncturist, trained in San Francisco and Sichuan, China. Meditation training and practice commenced in the 1970’s and continues across diverse traditions. Research and publication interests focus on student achievement and education equity, meditation and imagery, and cross-cultural studies of traditional health practices. Recent published works include Learning Life (Rainor Media, 2016). He has served on the American Public Health Association’s Governing Council, as chair of the California Acupuncture Board, editor-in-chief of the American Acupuncturist, and as an Advisory Council member of the NIH’s National Center for Complementary and Integrative Health (NCCIH).