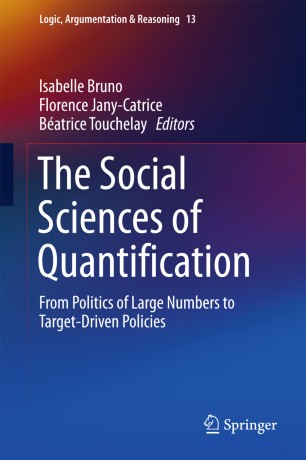 The Social Sciences of Quantification

From Politics of Large Numbers to Target-Driven Policies

This book details how quantification can serve both as evidence and as an instrument of government, whether when dealing with statistics on employment, occupational health and economic governance, or when developing public management or target-driven policies. In the process, it presents a thought-provoking homage to Alain Desrosières, who pioneered ways to study large numbers and the politics underlying them.
It opens with a summary of Desrosières's contributions to the field in which several generations of researchers detail how this statistician and historian profoundly influenced them. This tribute, based on personal testimonies, bears witness to the vitality of the school of thought and analytical framework Desrosières initiated. Next, a collection of essays explores the statistical argument in the neoliberal era, examining issues such as counting the homeless in Europe, measuring the performance of public services, and quantifying the effects of public action on the unemployed in France.
The third part details the uses of quantification. It reveals that although statistics are frequently used to the advantage of those in power, they can also play a vital role in challenging and resisting both the conventions underlying the measurements as well as the measurements themselves.
Featuring the work of economists, historians, political scientists, sociologists, and statisticians, this title provides readers with a thoughtful look at an influential figure in the history of statistics. It also shows how statistics are used to direct public policy, the degree of conflict that is possible in their production, and the disputes that can develop around their uses.