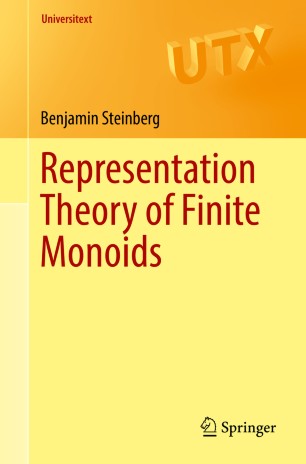 This first text on the subject provides a comprehensive introduction to the representation theory of finite monoids. Carefully worked examples and exercises provide the bells and whistles for graduate accessibility, bringing a broad range of advanced readers to the forefront of research in the area. Highlights of the text include applications to probability theory, symbolic dynamics, and automata theory. Comfort with module theory, a familiarity with ordinary group representation theory,  and the basics of Wedderburn theory, are prerequisites for advanced graduate level study. Researchers in algebra, algebraic combinatorics, automata theory, and probability theory, will find this text enriching with its thorough presentation of applications of the theory to these fields.

Prior knowledge of semigroup theory is not expected for the diverse readership that may benefit from this exposition. The approach taken in this book is highly module-theoretic and follows the modern flavor of the theory of finite dimensional algebras. The content is divided into 7 parts. Part I consists of 3 preliminary chapters with no prior knowledge beyond group theory assumed. Part II forms the core of the material giving a modern module-theoretic treatment of the Clifford –Munn–Ponizovskii theory of irreducible representations. Part III concerns character theory and the character table of a monoid. Part IV is devoted to the representation theory of inverse monoids and categories and Part V presents the theory of the Rhodes radical with applications to triangularizability. Part VI features 3 chapters devoted to applications to diverse areas of mathematics and forms a high point of the text. The last part, Part VII, is concerned with advanced topics. There are also 3 appendices reviewing finite dimensional algebras, group representation theory, and Möbius inversion.

Benjamin Steinberg is a professor at City College of New York and the CUNY graduate center. Steinberg is an algebraist interested in a broad range of areas including semigroups, geometric group theory and representation theory. Other research interests include automata theory, finite state Markov chains and algebras associated to etale groupoids. Steinberg is the co-author of a 2009 Springer publication in the SMM series entitled "The q-theory of Finite Semigroups" and author of the (c) 2012 UTX "Representation Theory of Finite Groups". Ben Steinberg is also an active editorial board member of the Semigroup Forum journal.

“It can be used as a textbook for advanced or post-graduate courses, but it is also of interest for all readers who enjoy clear algebraic text with numerous results.” (Jaak Henno, zbMATH 1428.20003, 2020)
“This is the first monograph concerned with the representation theory of finite monoids and which takes a modern module theoretic view of the subject. It intends to serve graduate students and researchers in combinatorics, automata theory and probability theory.” (K. Auinger, Monatshefte für Mathematik, Vol. 188, 2019)
“The real strength of the book is that it also addresses and presents many recent applications of representation theory of finite monoids which served as motivation for many activities in the area during the last twenty years. ... this is a well-written and very timely monograph which is suitable for both advanced researchers and graduate students from a wide range of mathematical areas.” (Volodymyr Mazorchuck, Mathematical Reviews, September, 2017)
Buy options