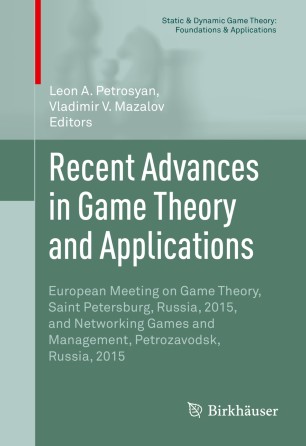 This contributed volume contains fourteen papers based on selected presentations from the European Conference on Game Theory SING11-GTM 2015, held at Saint Petersburg State University in July 2015, and the Networking Games and Management workshop, held at the Karelian Research Centre of the Russian Academy of Sciences in Petrozvavodsk, Russia, also in July 2015.  These papers cover a wide range of topics in game theory, including recent advances in areas with high potential for future work, as well as new developments on classical results.  Some of these include
The maturity and vitality of modern-day game theory are reflected in the new ideas, novel applications, and contributions of young researchers represented in this collection.  It will be of interest to anyone doing theoretical research in game theory or working on one its numerous applications.