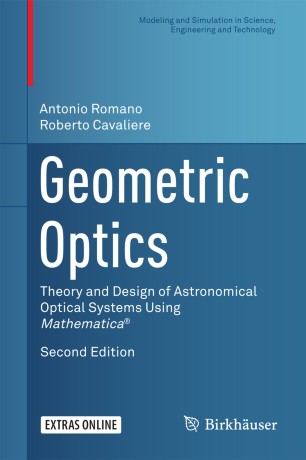 This text, now in its second edition, presents the mathematical background needed to design many optical combinations that are used in astronomical telescopes and cameras.  It uses a novel approach to third-order aberration theory based on Fermat’s principle and the use of particular optical paths (called stigmatic paths) instead of rays, allowing for easier derivation of third-order formulae.  Each optical combination analyzed is accompanied by a downloadable Mathematica® notebook that automates its third-order design, eliminating the need for lengthy calculations.
The essential aspects of an optical system with an axis of rotational symmetry are introduced first, along with a development of Gaussian optics from Fermat’s principal.  A simpler approach to third-order monochromatic aberrations based on both Fermat’s principle and stigmatic paths is then described, followed by a new chapter on fifth-order aberrations and their classification.  Several specific optical devices are discussed and analyzed, including the Newtonian and Cassegrain telescopes; the Schmidt, Wright, Houghton, and Maksutov cameras; the Klevtsov telescope; the Baker-Schmidt flat-field camera; the Buchroeder camera; and, new in this edition,  the Baker-Nunn camera and optical combinations with sub-corrector and Petzval objectives.  Finally, the Lagrangian and Hamiltonian formulations of geometric optics and Seidel’s third-order aberration theory are presented, and a new chapter considers optics in anisotropic media.  Numerous diagrams, worked-out examples, and exercises for further practice of key concepts are included throughout the book.
Geometric Optics is an excellent reference for advanced graduate students, researchers, and practitioners in applied mathematics, engineering, astronomy, and astronomical optics. It can also be used as a supplementary textbook for graduate-level courses in astronomical optics, optical design, optical engineering, programming with Mathematica®, or geometric optics.

“This is a comprehensive book on a variety of phenomena and basic elements of geometric optics with application in constructing astronomical optical telescopes. … The clearly written text … is a useful reference not only for professional researchers in the field of geometrical optics but can also be interesting to graduate students and teachers at college level.” (Vladimir Čadež, zbMATH 1364.78004, 2017)
Buy options