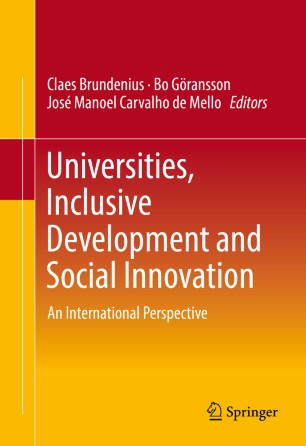 This book examines the ways in which universities can play a crucial role in inclusive development, social innovation and social entrepreneurship. It aims to prove the importance of inclusive development and inclusive innovation on economic growth and demonstrate the ways in which universities can be pioneers in this area through initiatives in social responsibility and social innovation. For example, providing access to a university education without discrimination of race, gender, income status, or other factors would help to diminish the increasing income differentials currently being experienced in many countries, especially in the developing world.  The research and studies included in this book provide insight into possible actions that can be taken by universities and public and private shareholders in inclusive development, social innovation, social entrepreneurship and overall regional economic and social development.

Innovation is currently considered to be the most important and dynamic factor explaining growth and development. At the same time, the traditional view considering innovation as having to be commercialized at any price is being challenged. Lately, there has been growing interest in innovation in the public sector, particularly with respect to social innovations designed to reduce income inequality. To address these concepts, constant exchange of ideas and information between research groups became necessary. UniDev (Universities in Development – the Evolving Role of Academic Institutions in Innovation Systems and Development) is an international research group with researchers in twelve countries interested in the role of universities in development. This book features the results of research performed by eleven research groups from UniDev country communities, presenting in-depth and comparative case studies from universities around the world, including Latin America, Northern and Eastern Europe, and sub-Saharan Africa. This title will be of interest to students, academics, researchers, and policy makers interested in the role of universities in development, social innovation and social entrepreneurship.

Claes Brundenius is Honorary Professor at the Lund School of Economics and Management, Lund University, Sweden, where he also received his PhD in Economic History. He is also Professor Extraordinaire at Tshwane University of Technology, South Africa, and Professorial Fellow at UNU-MERIT, Netherlands. He has been working at the OECD in Paris and has also worked as advisor in numerous projects and on international missions, including Brazil, Cuba, Chile, Vietnam, China, Taiwan, Russia, Nepal, Mozambique and South Africa. He has been Guest Professor at Pittsburgh University and Smith College, USA, and at the Vietnam National University.  Between 1997 and 2003 he was Senior Research Fellow at the Centre for Development Research in Copenhagen. His current research is focusing how STI policies can play a role for inclusive development. He is a member of several international advisory groups and is serving as a referee for various international journals, including World Development, Science and Public Policy and the Journal of Latin American Studies.

Bo Göransson is Associate Professor at the Department of Business Administration, School of Economics and Management, Lund University, Sweden. His research focuses on the role of science, technology and innovation in development and economic growth. As coordinator of the Network on the Evolving Role of Academic Institutions in Innovation Systems and Development (UniDev), he studies the changing demands for knowledge production in academic institutions and the role universities play in innovation systems and development. Present research projects include Innovation for whom? Universities as drivers of social innovation for equitable growth.

José Manoel Carvalho de Mello is Visiting Professor of the Graduate Program in Production Engineering, Research Associate at the Center for Studies in Innovation, Knowledge and Work - NEICT, and advisor to the Innovation Agency, Federal Fluminense University.