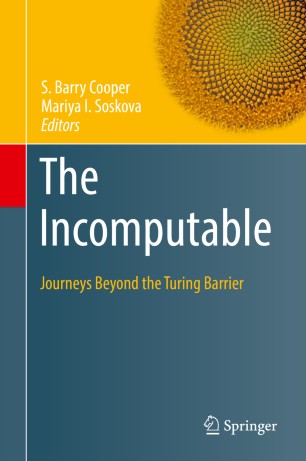 Journeys Beyond the Turing Barrier

This book questions the relevance of computation to the physical universe. Our theories deliver computational descriptions, but the gaps and discontinuities in our grasp suggest a need for continued discourse between researchers from different disciplines, and this book is unique in its focus on the mathematical theory of incomputability and its relevance for the real world. The core of the book consists of thirteen chapters in five parts on extended models of computation; the search for natural examples of incomputable objects; mind, matter, and computation; the nature of information, complexity, and randomness; and the mathematics of emergence and morphogenesis.

This book will be of interest to researchers in the areas of theoretical computer science, mathematical logic, and philosophy.

Prof. S. Barry Cooper was a Professor of Pure Mathematics at the University of Leeds. He was the founding President of the Computability in Europe Association, and a prolific author and editor in the domain of computability. He championed Alan Turing's achievements in logic and computer science, and in particular he motivated and organized cross-disciplinary collaborations, among them the events, publications and broadcasts of the Alan Turing Year in 2012.