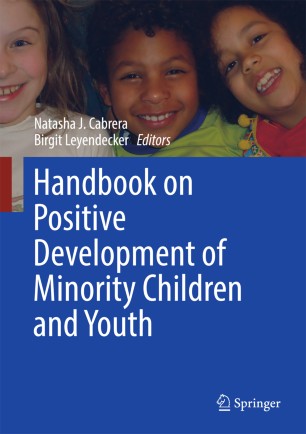 Handbook on Positive Development of Minority Children and Youth

This Handbook presents current research on children and youth in ethnic minority families. It reflects the development currently taking place in the field of social sciences research to highlight the positive adaptation of minority children and youth. It offers a succinct synthesis of where the field is and where it needs to go. It brings together an international group of leading researchers, and, in view of globalization and increased migration and immigration, it addresses what aspects of children and youth growing in ethnic minority families are universal across contexts and what aspects are more context-specific. The Handbook  examines the individual, family, peers, and neighborhood/policy factors that protect children and promote positive adaptation. It examines the factors that support children’s social integration, psychosocial adaptation, and external functioning. Finally, it looks at the mechanisms that explain why social adaptation occurs

Natasha J. Cabrera, Ph.D, is Professor of Human Development at the University of Maryland and was a Society for Research in Child Development, Executive Branch Fellow at the National Institute of Child Health and Human Development (NICHD). Dr. Cabrera's research, funded by NICHD, focuses on father involvement and children's social development; adaptive and maladaptive factors related to parenting; ethnic and cultural variations in fathering and mothering behaviors; family processes in a social and cultural context and children's development; and the mechanisms that link early experiences to children's school readiness. Cabrera has published in peer-reviewed journals on policy, methodology, theory and the implications of fathering and mothering behaviors on child development in low-income minority families. She is the co-editor of the Handbook of Father Involvement: Multidisciplinary Perspectives, Second Edition (Taylor & Francis, 2013) and Latina/o Child Psychology and Mental Health: Vol 1: Early to Middle Childhood: Development and Context and Vol 2: Adolescent Development (Praeger, 2011). Dr. Cabrera is the Associate Editor of ECRQ and Child Development and the recipient of the National Council and Family Relations award for Best Research Article regarding men in families in 2009. In 2015 The National Academy of Sciences appointed her to its committee supporting the parents of young children and she is a 2015-2016 Visiting Scholar at the Russell Sage Foundation
Birgit Leyendecker is a Professor for Developmental Psychology at the Ruhr-University Bochum. Her research focus is on cultural perspectives on child development and parenting, cultural and psychosocial adaptation of immigrant children and their families, and on resilience, particularly on the role of internal and external resources on children’s developmental pathways. She is the Principal Investigator of an international study on the development of resilience among immigrant children and their families. In 2016, she started a funded project on refugee children and their families in Germany.