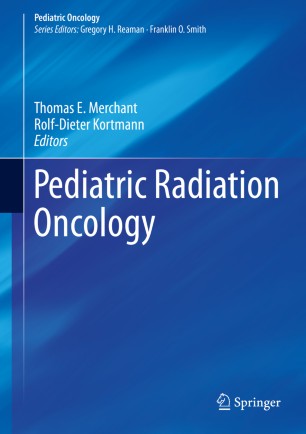 This book presents the most up-to-date and innovative information on the targeting and treatment of a wide range of childhood cancers by means of radiation therapy. Written by global experts in pediatric radiation oncology, it documents in detail the treatment regimens appropriate to each disease, highlighting the recent advances that promise to improve rates of survival and cure. The use of image-guided and intensity-modulated radiation therapy is clearly described, and careful attention is also devoted to the roles of proton therapy, stereotactic radiosurgery, stereotactic fractionated radiosurgery, and modulated arc radiotherapy. Separate chapters address localization and verification procedures and anesthesia; pediatric radiation oncology in the palliative care setting; and aspects that are especially relevant in low- and medium-income countries. Beyond clinical radiation oncology, relevant information is provided on radiation physics. The book concludes by examining future directions in the field.

Dr. Merchant is board certified in Radiation Oncology and received his medical degree from the Chicago College of Osteopathic Medicine, Chicago, Illinois and Ph.D. in experimental pathology from the University of Utrecht, The Netherlands.

As Chair of Radiation Oncology, Dr. Merchant oversees a department that includes nearly 70 faculty and staff dedicated to pediatric radiation oncology. The focus of his practice and research includes the following diseases: medulloblastoma, ependymoma, craniopharyngioma, and low-grade glioma. His special interests include brain tumors in young children, side effects of radiation therapy, re-irradiation, and proton therapy. He led the development of the St. Jude Red Frog Events Proton Therapy Center. The world’s first proton therapy center dedicated solely to the treatment of pediatric cancer patients.

Dr. Rolf-Dieter Kortmann is a Professor in Medicine and Head of Department of Radiation Therapy, University of Leipzig, Germany.

After qualification for radiation oncology in 1992, scientific research focused mainly on childhood brain tumours finally leading to the establishment of the German Study and Reference Centre for Paediatric Radiation Oncology in Childhood Brain Tumours. With the introduction of prospective brain tumour trials in Germany in the early 90s

prospective quality control programmes for radiotherapy were introduced on a nationwide level.

Since 2004 educational programmes have been created for the now independent countries of the former Soviet Union in collaboration with the International Atomic Energy Agency (IAEA) and the European Society of Therapeutic Radiation Oncology (ESTRO). Currently, ESTRO-PROS Teaching Courses are organized addressing radiation oncologists worldwide.

“This is an excellent complement and fortifies the libraries of both radiation and pediatric oncologists. … its updates in the rapidly changing molecular landscape of pediatric tumors, and its clear descriptions of the inexorable evolution of radiation technology, make it important reading for students, trainees, and practitioners from all disciplines who treat children with cancer.” (Bernadine Rose Donahue, Doody's Book Reviews, June, 2018)

“This book provides an excellent summary of common intracranial and extracranial pediatric malignancies treated with radiation therapy, with a focus on radiation specific treatment guidelines and clinical outcome data. The book is best suited for radiation oncologists or anyone looking for a comprehensive overview of the diagnosis and management strategies for the diseases included.” (Bree R. Eaton, Neurosurgery, Vol. 84 (3), March, 2019)