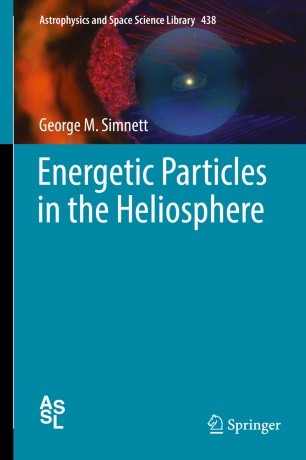 Energetic Particles in the Heliosphere

This monograph traces the development of our understanding of how and where energetic particles are accelerated in the heliosphere and how they may reach the Earth. Detailed data sets are presented which address these topics. The bulk of the observations are from spacecraft in or near the ecliptic plane. It is timely to present this subject now that Voyager-1 has entered the true interstellar medium. Since it seems unlikely that there will be a follow-on to the Voyager programme any time soon, the data we already have regarding the outer heliosphere are not going to be enhanced for at least 40 years.

George Simnett obtained his Ph D from Imperial College, London in 1966, having started there in 1961.

This was the dawn of the space age. In 1967 he moved to Goddard Space Flight Center where he worked on the energetic particle data from IMP-4 and IMP=5.  In 1969 he went as Assistant Professor to the University of California, Riverside, where he was project manager on an instrument to detect energetic solar neutrons using the UCR balloon-borne detector. In 1975, now based at the University of Birmingham, UK, he collaborated with Professor de Jager (PI), Utrecht, to build the Hard X-ray Imaging Spectrometer for NASA's Solar Maximum Mission, which was launched in 1980. In 1977 he joined the team led by Dr Lanzerotti (PI) to propose a particle instrument for the International Solar Polar Mission (later renamed Ulysses, launched 1990) which was to be the first (and so far only) spacecraft to go virtually over the solar poles, via Jupiter.

In 1989 he collaborated with Dr Brueckner (PI) on the LASCO suite of coronagraphs which are on the SOHO spacecraft, launched in 1995 and still operating at the inner Lagrangian point. More recently he has led the University of Birmingham team in their involvement in the EUV Imaging Spectrometer on the Japanese Hinode spacecraft (formerly Solar-B launched in 2006; the Solar Mass Ejection Imager (SMEI) on the US Navy Coriolis spacecraft, which was operational in a polar orbit from 2003-2011; and the Sun-Earth Connection Coronal Heliospheric Investigation (SECCHI) on NASA's STEREO mission, launched 2006.

He has over 200 publications in refereed journals and he is currently Emeritus Professor, University of Birmingham.

“The book provides an excellent overview of our current knowledge of energetic charged particles in heliosphere. It brings out the complexity of these data and highlights the challenges that we face when interpreting these data against our still-limited theoretical understanding of how the heliosphere work.” (Mike Hapgood, The Observatory, April, 2018)
Buy options