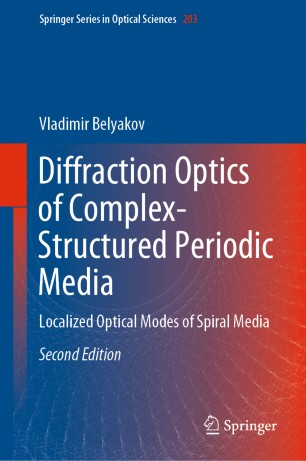 This book presents recent theoretical and experimental results of localized optical modes and low-threshold lasing in spiral photonic media. Efficient applications of localized modes for low-threshold lasing at the frequencies of localized modes are a central topic of the book's new chapters. Attention is paid to the analytical approach to the problem. The book focuses on one of the most extensively studied media in this field, cholesteric liquid crystals. The chosen model, in the absence of dielectric interfaces, allows to remove the problem of polarization mixing at surfaces, layers and defect structures. It allows to reduce the corresponding equations to the equations for light of diffracting polarization only. The problem concentrates then on the edge and defect optical modes. The possibility to reduce the lasing threshold due to an anomalously strong absorption effect is presented theoretically for distributed feedback lasing. It is shown that a minimum of the threshold-pumping wave intensity can be reached for the pumping wave frequency coinciding with the localized mode frequency (what can be reached for a pumping wave propagating at a certain angle to the helical axes). Analytic expressions for transmission and reflection coefficients are presented.

In the present second edition, experimental observations of theoretically revealed phenomena in spiral photonic media are discussed. The main results obtained for spiral media are qualitatively valid for photonic crystals of any nature and therefore may be applied as a guide to investigations of other photonic crystals where the corresponding theory is more complicated and demands a numerical approach. It is demonstrated that many optical phenomena occurring at the frequencies of localized modes reveal unusual properties which can be used for efficient applications of the corresponding phenomena, efficient frequency conversion and low threshold lasing, e.g.

For the convenience of the reader, an introduction is given to conventional linear and nonlinear optics of structured periodic media. This book is valuable to researchers, postgraduate, and graduate students active in theoretical and experimental physics in the field of interaction of radiation with condensed matter.

Vladimir Alekseevic Belyakov graduated from Moscow Engineering Institute in 1961. Afterwards he was a postgraduate student at the I. V. Kurchatov Atomic Energy Institute in the years 1961 – 64. He was the head of the Laboratory of the All-Union Physics-Technical and Radio-Technical Institute 1964 – 82 and of Surface and Vacuum Research Centre, Moscow 1982–95. Since 1995, he is senior Researcher in L. D. Landau Institute for Theoretical Physics. Since 1982 he is part-time Professor at the Moscow Institute for Physics and Technology. He had short stays as visiting professor of the Universities Leuven (Belgium), Tokyo (Japan), Paris Sud (France), Glasgow Thrathclyde (Scotland) and others.