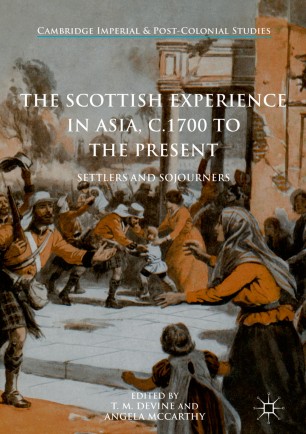 The Scottish Experience in Asia, c.1700 to the Present

This pioneering volume focuses on the scale, territorial trajectories, impact, economic relationships, identity and nature of the Scottish-Asia connection from the late seventeenth century to the present. It is especially concerned with identifying whether there was a distinctive Scottish experience and if so, what effect it had on the East. Did Scots bring different skills to Asia and how far did their backgrounds prepare them in different ways? Were their networks distinctive compared to other ethnicities? What was the pull of Asia for them? Did they really punch above their weight as some contemporaries thought, or was that just exaggerated rhetoric? If there was a distinctive ‘Scottish effect’ how is that to be explained?

T. M. Devine is Sir William Fraser Professor Emeritus of Scottish History and Palaeography at the University of Edinburgh, UK. He was knighted in 2014 for ‘services to the study of Scottish history’.

Angela McCarthy is Professor of Scottish and Irish History at the University of Otago, New Zealand. She is the author and editor of several books on migration, including that of the Scots.