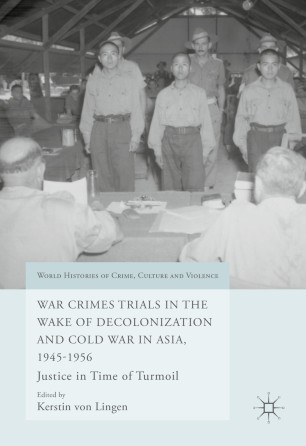 War Crimes Trials in the Wake of Decolonization and Cold War in Asia, 1945-1956

Justice in Time of Turmoil

This book investigates the political context and intentions behind the trialling of Japanese war criminals in the wake of World War Two. After the Second World War in Asia, the victorious Allies placed around 5,700 Japanese on trial for war crimes. Ostensibly crafted to bring perpetrators to justice, the trials intersected in complex ways with the great issues of the day. They were meant to finish off the business of World War Two and to consolidate United States hegemony over Japan in the Pacific, but they lost impetus as Japan morphed into an ally of the West in the Cold War. Embattled colonial powers used the trials to bolster their authority against nationalist revolutionaries, but they found the principles of international humanitarian law were sharply at odds with the inequalities embodied in colonialism. Within nationalist movements, local enmities often overshadowed the reckoning with Japan. And hovering over the trials was the critical question: just what was justice for the Japanese in a world where all sides had committed atrocities?

Kerstin von Lingen is Researcher and Lecturer at Heidelberg University, Germany in the ‘Asia and Europe in a Global Context’ Cluster of Excellence. Since 2013, she has led an independent research group, ‘Transcultural Justice: Legal Flows and the Emergence of International Justice within the East Asian War Crimes Trials, 1945-1954’. She is the 2016 laureate of the International Chair for the History of the Second World War, awarded by the Université Libre de Bruxelles.

“This edited collection is an erudite and empirically rich volume that recasts Allied war crimes trials in Asia, and reconsiders questions of global justice and empire, decolonization, and Cold War history. … Kerstin von Lingen and her contributors have added tremendously to our understanding of war crimes trials as an interdisciplinary field of global history, and importantly, as a key legal conjuncture in the unraveling of European empire in Asia.” (Andrew Levidis, H-Soz-Kult, hsozkult.de, July, 2018)
Buy options