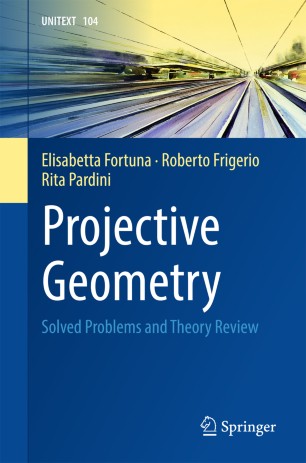 This book starts with a concise but rigorous overview of the basic notions of projective geometry, using straightforward and modern language. The goal is not only to establish the notation and terminology used, but also to offer the reader a quick survey of the subject matter. In the second part, the book presents more than 200 solved problems, for many of which several alternative solutions are provided. The level of difficulty of the exercises varies considerably: they range from computations to harder problems of a more theoretical nature, up to some actual complements of the theory. The structure of the text allows the reader to use the solutions of the exercises both to master the basic notions and techniques and to further their knowledge of the subject, thus learning some classical results not covered in the first part of the book. The book addresses the needs of undergraduate and graduate students in the theoretical and applied sciences, and will especially benefit those readers with a solid grasp of elementary Linear Algebra.

“This is a modern textbook on classic projective geometry over (mostly) real and complex vectorspaces. … The book will also serve well as a source and reference for an undergraduate lecture plus exercise course on projective geometry.” (Hans-Peter Schröcker, zbMATH 1361.51004, 2017)
Buy options