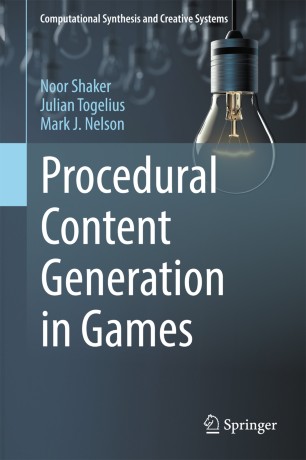 This book presents the most up-to-date coverage of procedural content generation (PCG) for games, specifically the procedural generation of levels, landscapes, items, rules, quests, or other types of content. Each chapter explains an algorithm type or domain, including fractal methods, grammar-based methods, search-based and evolutionary methods, constraint-based methods, and narrative, terrain, and dungeon generation.

Noor Shaker is a postdoctoral researcher in the Center for Applied Game Research in the Dept. of Architecture, Design and Media Technology of Aalborg University Copenhagen (AAU CPH). She was previously a postdoctoral researcher at the Center for Computer Games Research, IT University of Copenhagen. She is the chair of the IEEE CIS Task Force on Player Modeling. Her research interests include player modeling, procedural content generation, computational creativity, affective computing, and player behavior imitation.

Julian Togelius is an associate professor in the Dept. of Computer Science and Engineering of New York University, and a codirector of the NYU Game Innovation Lab. He was previously an Associate Professor at the Center for Computer Games Research, IT University of Copenhagen. He works on all aspects of computational intelligence and games and on selected topics in evolutionary computation and evolutionary reinforcement learning. His current main research directions involve search-based procedural content generation, game adaptation through player modelling, automatic game design, and fair and relevant benchmarking of game AI through competitions. He is a past chair of the IEEE CIS Technical Committee on Games, and an associate editor of the IEEE Trans. on Computational Intelligence and Games.

Mark J. Nelson is a senior research fellow at the MetaMakers Institute of Falmouth University, an institute dedicated to computational creativity and generative interactive entertainment. He was previously an Assistant Professor at the Center for Computer Games Research, IT University of Copenhagen. He works on AI-based design support for videogames (and other creative design domains), focusing on formalization of things such as game mechanics to enable automated analysis and generation. A long-time vision is an interactive, semiautomated CAD-style system for game prototyping. Prior to the IT University of Copenhagen, he was affiliated with the Expressive Intelligence Studio at the University of California, Santa Cruz, and the School of Interactive Computing at Georgia Institute of Technology.