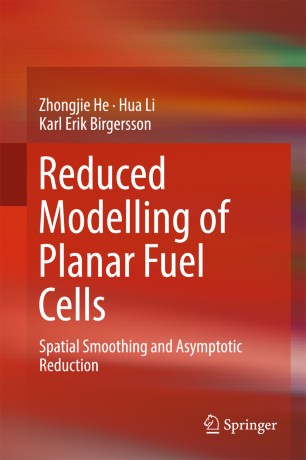 This book focuses on novel reduced cell and stack models for proton exchange membrane fuel cells (PEMFCs) and planar solid oxide fuel cells (P-SOFCs) that serve to reduce the computational cost by two orders of magnitude or more with desired numerical accuracy, while capturing both the average properties and the variability of the dependent variables in the 3D counterparts. The information provided can also be applied to other kinds of plate-type fuel cells whose flow fields consist of parallel plain channels separated by solid ribs.

These fast and efficient models allow statistical sensitivity analysis for a sample size in the order of 103 without prohibitive computational cost to be performed to investigate not only the individual, but also the simultaneous effects of a group of varying geometrical, material, and operational parameters. This provides important information for cell/stack design, and to illustrate this, Monte Carlo simulation of the reduced P-SOFC model is conducted at both the single-cell and stack levels.

Dr. He received his B. Eng. Degree in Mechanical Engineering (major in Industrial Design) and Ph.D. degree in Engineering Mechanics from Nanyang Technological University in Singapore in 2009 and 2014, respectively. Currently, Dr. He is a research fellow in Energy Research Institute at Nanyang Technological University (ERIAN). He is strong at multiphysics modelling and simulation, especially at developing fast and efficient models for fuel cells whose performance typically involves multiphysical behaviours such as transport phenomena, thermal dynamics, and electrochemical performance. His research interests also include electrostatic precipitation, steam soaking, and acoustic agglomeration to remove particulate matters from air.

Dr. Hua Li received his B.Sc and M.Eng degrees in Engineering Mechanics from Wuhan University of Technology, P.R.C., in 1982 and 1987, respectively. He obtained his Ph.D degree in Mechanical Engineering from the National University of Singapore in 1999. From 2000 to 2001, Dr. Li was a Postdoctoral Associate at the Beckman Institute for Advanced Science and Technology, University of Illinois at Urbana-Champaign. At the end of 2005, he was a Visiting Scientist (on invitation) at the Department of Chemical and Biomolecular Engineering of Johns Hopkins University. From 2001 to 2006, he was a Research Scientist in the A*STAR Institute of High Performance Computing. Dr Li joined Nanyang Technological University (NTU) as an Assistant Professor in June 2006 and he was promoted to Associate Professor in March 2013. He is currently in the School of Mechanical & Aerospace Engineering at NTU.

His research interests include the multiphysics modelling of soft matters (smart hydrogel in bioMEMS and biological cell in microscale fields); development of highly efficient numerical computational methodology (meshless & multiscale algorithms); simulation of sustainable energy (building energy efficiency and fuel cell system); and dynamics (high-speed rotating shell and composite materials structure). He has sole-authored a monograph book entitled “Smart Hydrogel Modelling” published by Springer, co-authored two monograph books entitled “Meshless Methods and Their Numerical Properties” by CRC Press and “Rotating Shell Dynamics” by Elsevier, and 2 book chapters, one on MEMS simulation and the other on hydrogel drug delivery system modelling, and authored/co-authored over 140 articles published in peer-reviewed international journals. He received the Silver Award in HPC Quest 2003 - The Blue Challenge presented by IBM & IHPC in 2003. He is also extensively funded by agencies and industry, for example, the principal investigator of a computational BioMEMS project awarded under A*STAR’s strategic research programme in MEMS. Dr. Karl Erik BIRGERSSON is an associate professor at the Chemical and Biomolecular Department and an affiliate of the Engineering Science Programme at the National University of Singapore (NUS) and the Solar Energy Research Institute of Singapore. He was awarded his Ph.D. in Fluid Mechanics from the Royal Institute of Technology (KTH), Stockholm, in 2004. He also holds an MS degree in Chemical Engineering from KTH (1998) and a Licentiate degree (2003). He was a postdoctoral fellow (2004-2005) and research engineer (2005-2006) at the Institute of High Performance Computing, A*Star, Singapore. He specializes in mathematical modelling and transport phenomena; his current research focuses on electrochemical energy systems and organic solar cells. He has published around 150 papers (journal, conference and book chapters). Besides research, he enjoys teaching and experimenting with teaching strategies; he has been awarded twelve teaching awards since 2006 in NUS.