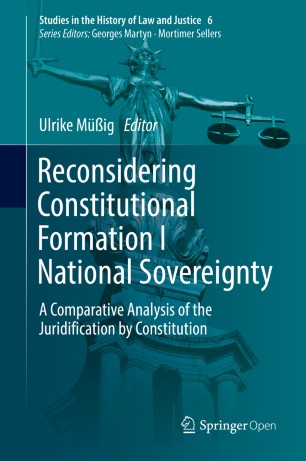 A Comparative Analysis of the Juridification by Constitution

Part of the Studies in the History of Law and Justice book series (SHLJ, volume 6)

Legal studies and consequently legal history focus on constitutional documents, believing in a nominalist autonomy of constitutional semantics.Reconsidering Constitutional Formation in the late 18th and 19th century, kept historic constitutions from being simply log-books for political experts through a functional approach to the interdependencies between constitution and public discourse. Sovereignty had to be ‘believed’ by the subjects and the political élites. Such a communicative orientation of constitutional processesbecame palpable in the ‘religious’ affinities of the constitutional preambles. They were held as ‘creeds’ of a new order, not only due to their occasional recourse to divine authority, but rather due to the claim for eternal validity contexts of constitutional guarantees.

The communication dependency of constitutions was of less concern in terms of the preamble than the constituents’ big worries about government organisation. Their indecisiveness between monarchical and popular sovereignty was established through the discrediting of the Republic in the Jacobean reign of terror and the ‘renaissance’ of the monarchy in the military resistance against the French revolutionary and later Napoleonic campaigns. The constitutional formation as a legal act of constituting could therefore defend the monarchy from the threat of the people (Albertine Statute 1848), could be a legal decision of a national constituent assembly (Belgian Constitution 1831), could borrow from the old liberties (Polish May Constitution 1791) or try to remain in between by referring to the Nation as sovereign (French September Constitution 1791, Cádiz Constitution 1812).

Ulrike Müßig, née Seif, is the head of the Chair for Civil Law, German and European Legal History at the University of Passau. After studies of Law at the Universities of Würzburg and Cambridge, and as a visitor at the Université Paris II, Panthéon-Assas, she conducted her doctoral dissertation at the Institute for Comparative Law at the University of Würzburg and at the Hamburg Max Planck Institute for Foreign and International Private Law. In 2000 she completed her postdoctoral qualification (habilitation) at the University of Würzburg in the areas of European and German Legal History, Civil Law, Comparative Law and International Private Law, funded by the Bayerischen Habilitationsförderpreis (1996). Her postdoctoral  thesis “Recht und Justizhoheit” on comparative legal history has won the Heisenberg Prize of the DFG (German Research Foundation) 2000, appeared in a second edition 2009 and in a Spanish edition “El juez legal” 2014.

In 2013 Ulrike Müßig received the ERC Advanced Grant ReConFort, Reconsidering Constitutional Formation (1.9 million €) for her research project on Comparative Constitutional History in 18th and 19th century Europe. Since 2014 she is a corresponding member of the National Academy al Andalus in the historic-judicial class (Ilustre Sociedad Andaluza de Estudios Histórico-Jurídicos). In April 2015 Prof. Dr. Ulrike Müßig was elected into the historical-philosophical class of the Austrian Academy of Sciences.