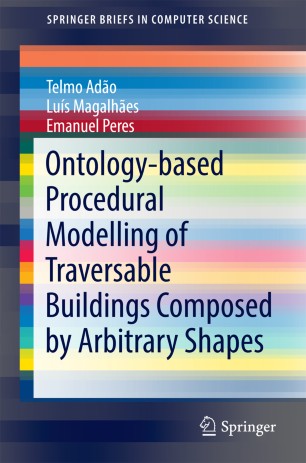 This book presents a new procedural modelling methodology capable of producing traversable buildings constrained by arbitrary convex shapes, based on a pure treemap approach. The authors establish a process to change the format of interior rooms, through wall number modification and offer an adaptation of a “fake-concave” technique to support non-convex building layouts. It will also include:

• A proposal for an extensible building ontology to guide the methodology process and support the generation of other architectural style buildings (e.g. roman houses);

• A presentation of an ontology-based grammar to provide the procedural modelling methodology with production rules;

• Experimental computer managed processes for the stochastic generation of buildings.

Most of the existing solutions regarding building interiors only focus on the generation of floor plans mainly composed of rectangular shapes. Yet there are a wide variety of ancient and contemporary buildings that are composed of shapes other than rectangles, both internally and externally. Ontology-based Procedural Modelling of Traversable Buildings Composed by Arbitrary Shapes will address this by providing the Procedural Modelling field with processes and techniques capable of properly supporting for example, digital preservation of cultural heritage or extensive virtual urban environment productions, specifically ones involving the generation/reconstruction of virtual buildings with such geometric requirements.