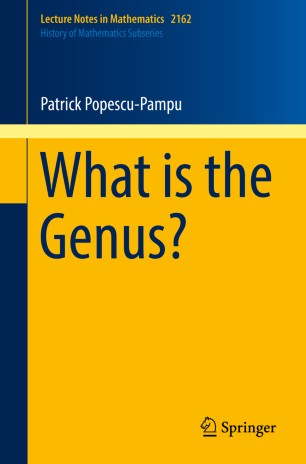 What is the Genus?

Exploring several of the evolutionary branches of the mathematical notion of genus, this book traces the idea from its prehistory in problems of integration, through algebraic curves and their associated Riemann surfaces, into algebraic surfaces, and finally into higher dimensions. Its importance in analysis, algebraic geometry, number theory and topology is emphasized through many theorems. Almost every chapter is organized around excerpts from a research paper in which a new perspective was brought on the genus or on one of the objects to which this notion applies. The author was motivated by the belief that a subject may best be understood and communicated by studying its broad lines of development, feeling the way one arrives at the definitions of its fundamental notions, and appreciating the amount of effort spent in order to explore its phenomena.