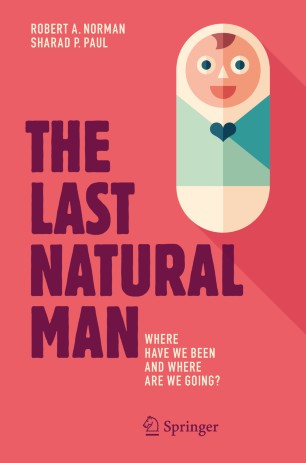 Where Have We Been and Where Are We Going?

This book describes a paradigm shift for all of humanity— we are at a point where we may be the last generation that is still partially or fully natural. We are often balancing on the precipice between science and science fiction, now ready to tip the scales and slide comfortably into the future of great discoveries and wonderful changes.

Many crucial and important questions are addressed in the pages of this book, including:  what are the true medical and social problems facing us?  Which are the highest value targets we need to focus on to ensure our best route of success?  How can we protect our futures and enhance our lives by understanding what it means to be the “last natural humans” to roam this planet?

The Last Natural Man combines a fascination with the history of medicine, evolutionary biology, and medical anthropology and mix it with modern medicine and science to investigate how we evolved and where we are headed. The overall result is a clear and engaging guidebook for navigating the often confusing and cloudy waters of the future of medicine and our life on Earth.

Dr. Robert A. Norman is a board-certified dermatologist and family practitioner who has been in practice for over 25 years. He is a faculty member for five medical schools and has been honored with numerous service and teaching awards, including Physician of the Year (2005) and Distinguished Service Award (2007) in Hillsborough County, Tampa, Florida.  He has been the editor and contributing writer of eight textbooks on Geriatrics and Geriatric Dermatology and published over 150 articles in various major media publications. Dr. Norman has a private practice and is the chief physician and owner of Dermatology Healthcare, founded in 1994, which delivers essential skin care services for nursing home patients.

Sharad P. Paul MD is a skin cancer surgeon, family physician, academic, skincare expert, evolutionary biologist, storyteller and social entrepreneur. Born in England, with a childhood in India, he is a ‘global citizen’ who lives Down Under. In 2003, he received a Health Innovation Award. In 2008, he was featured in international editions of TIME magazine in an article titled ‘Open Heart Surgeon.’ He has been called ‘Renaissance Man’ by New Zealand Herald’s Canvas magazine and ‘polymath’ by Good magazine. In 2012, he was awarded the NZ Medical Association’s highest honor, the Chair’s Award, and was a finalist for the New Zealander of the Year Award. He has spoken at ideas conferences like THiNK alongside Robert De Niro, Tina Brown, David Barash, VS Naipaul and at several major literary festivals such as India’s Jaipur Literary Festival alongside Margaret Atwood, Stephen Fry, Atul Gawande etc. and at Dublin’s Dalkey Book Festival alongside Malcolm Gladwell. In 2015, he was awarded the Ko Awatea International Excellence in Health Improvement Award, an 'Award for Leading Health Improvement on a Global Scale.’