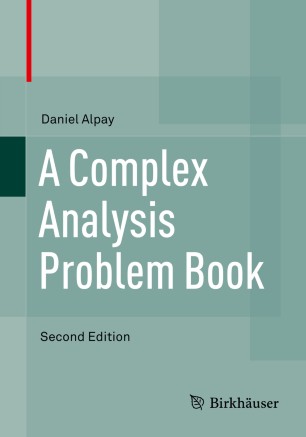 This second edition presents a collection of exercises on the theory of analytic functions, including completed and detailed solutions. It introduces students to various applications and aspects of the theory of analytic functions not always touched on in a first course, while also addressing topics of interest to electrical engineering students (e.g., the realization of rational functions and its connections to the theory of linear systems and state space representations of such systems). It provides examples of important Hilbert spaces of analytic functions (in particular the Hardy space and the Fock space), and also includes a section reviewing essential aspects of topology, functional analysis and Lebesgue integration.

Benefits of the 2nd edition

Rational functions are now covered in a separate chapter. Further, the section on conformal mappings has been expanded.

Prof. Daniel Alpay is a faculty member of the department of mathematics at Ben-Gurion University, Beer-Sheva, Israel. He is the incumbent of the Earl Katz Family chair in algebraic system theory. He has a double formation of electrical engineer (Telecom Paris, graduated 1978) and mathematician (PhD, Weizmann Institute, 1986). His research includes operator theory, stochastic analysis, and the theory of linear systems. Daniel Alpay is one of the initiators and responsible of the dual track electrical-engineering mathematics at Ben-Gurion University. He is the author of "An Advanced Complex Analysis Problem Book" (Birkhäuser, 2015). Together with co-authors, he has written seven books and close to 240 research papers, and edited fifteen books of research papers, and in particular the Springer Reference Work on Operator Theory.

“This update to the first edition … is a well-organized compilation of more than 475 challenging exercises with thorough solutions that assist with the study of analytic functions. The new edition contains several new chapters with updated content. … This book will be a welcome addition to the personal library of readers with a strong foundation in mathematics. Summing Up: Recommended. Upper-division undergraduates and above; faculty and professionals.” (D. P. Turner, Choice, Vol. 54 (11), July, 2017)

“This volume is a collection of exercises in the theory of analytic functions, with complete and detailed solutions. … The reviewer considers that the book can be used as a primary text for a course in complex analysis. A reader of the full book will know the basic of one complex variable theory and will have seen it integrated into mathematics as a whole. Research mathematicians will discover several novel perspectives.” (Vicenţiu D. Rădulescu, zbMATH 1356.30001, 2017)
Buy options