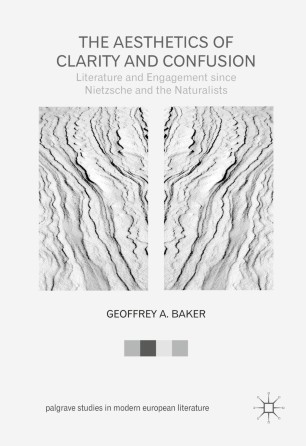 The Aesthetics of Clarity and Confusion

Literature and Engagement since Nietzsche and the Naturalists

What should literature with political aims look like? This book traces two rival responses to this question, one prizing clarity and the other confusion, which have dominated political aesthetics since the late nineteenth century. Revisiting recurrences of the avant-garde experimentalism versus critical realism debates from the twentieth century, Geoffrey A. Baker highlights the often violent reductions at work in earlier debates. Instead of prizing one approach over the other, as many participants in those debates have done, Baker instead focuses instead on the manner in which the debate itself between these approaches continues to prove productive and enabling for politically engaged writers. This book thus offers a way beyond the simplistic polarity of realism vs. anti-realism in a study that is focused on influential strands of thought in England, France, and Germany and that covers well-known authors such as Zola, Nietzsche, Arnold, Mann, Brecht, Sartre, Adorno, Lukács, Beauvoir, Morrison, and Coetzee.