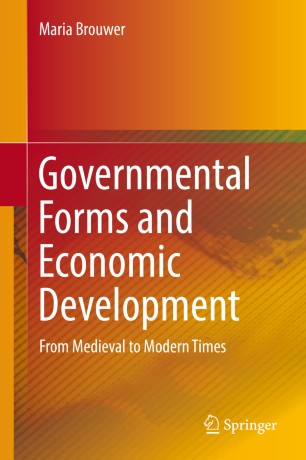 From Medieval to Modern Times

This book investigates the performance of economic development under different forms of government, ranging from autocratic states to liberal democracies. Starting with a critical review of the literature on social and economic development, including the works of Frank Knight, Max Weber, Joseph Schumpeter and Peter Drucker, it offers a historical analysis of the expansion of markets, cities and trade in medieval Europe, and the monopolization of trade by the emerging European nation states. The book also presents a case study on the rise and decline of the Dutch Republic, discusses topics such as the disadvantages of the central direction of economic organizations, and federal decentralization as a model for promoting growth and investment, and illustrates how successful companies like Semco and Google are building on centuries-old management principles.

Maria Brouwer worked as a professor of industrial organization at the economics department of the university of Amsterdam. She also taught at Haarlem Business School, Rotterdam and Nijmegen university. Her research focuses on the economics and governance of innovation.