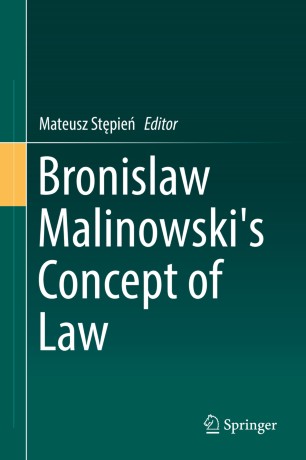 This book discusses the legal thought of Bronislaw Malinowski (1884-1942), undoubtedly one of the titans of social sciences who greatly influenced not only the shape of modern cultural anthropology but also the social sciences as a whole. This is the first comprehensive work to focus on his legal conceptions: while much has been written about his views on language, magic, religion, and culture, his views on law have not been fairly reconstructed or recapitulated. A glance at the existing literature illustrates how little has been written about Malinowski’s understanding of law, especially in the legal sciences. This becomes even more evident given the fact that Malinowski devoted much of his scholarly work to studying law, especially in the last period of his life, during which he conducted broad research on law and “primitive jurisprudence”. The main aim of this book is to address this gap and to present in detail Malinowski’s thoughts on law.

This book is divided into two parts. Part I focuses largely on the impact that works of two distinguished professors from his alma mater (L. Dargun and S. Estreicher) had on Malinowski’s legal thoughts, while Part II reconstructs Malinowski’s inclusive, broad and multidimensional understanding of law and provides new readings of his legal conceptions mainly from the perspective of reciprocity. The book offers a fresh look at his views on law, paving the way for further studies on legal issues inspired by his methodological and theoretical achievements. Malinowski’s understanding of law provides a wealth of fodder from which to formulate interesting research questions and a solid foundation for developing theories that more accurately describe and explain how law functions, based on new findings in the social and natural sciences.