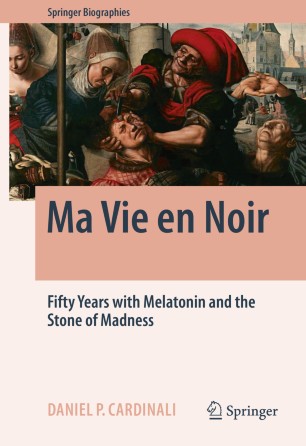 Fifty Years with Melatonin and the Stone of Madness

I wrote this book urged by the overwhelming desire that arises towards the end of life to recapitulate the past. My goal was to summarize my experience of practicing science at the end of the 20th and early 21st centuries in Argentina, a country located far away from the world’s leading scientific centers. In the book, I summarize the intricacies of the pineal gland (“the stone of madness”) as historical, mystical and medical entity and its entry in contemporary medicine with the description of melatonin. I also reflect on how being associated with an unexplored subject at the beginning of their scientific career impacts the life of a scientist throughout their entire life. Today we know that in humans pineal melatonin begins is released every day late in the evening, and there is evidence that it is the trigger for the sleep process. But the most exciting aspect of melatonin is that it is a substance that is present in all living creatures, from unicellular organisms to plants and higher mammals, a fact that evinces its importance for life. Further, the neuroprotective action of melatonin promises to be crucial for the control of neurodegenerative diseases we face as a pandemic in this century. The discoverer of melatonin, Aaron Lerner, based its name on melano, the Greek word for black, because of its effect on the pigment cells of the skin. As in "La vie en rose", the immortal Edith Piaf song written in 1946, my lifelong work with melatonin could well be called "Ma vie en noir".

Dr. Daniel Pedro Cardinali completed his MD and PhD degrees at the University del Salvador, Buenos Aires. During 1971 and 1972 he was Research Assistant at the Department of Nutrition and Food Science, MIT, USA. Since 1973 he has been a Research Career Awardee of the Argentine National Research Council, being promoted to its highest stage (Superior Investigator) in 1992. From 1986 to 2008 he was Professor of Physiology at the Faculty of Medicine, University of Buenos Aires, being nominated as Professor Emeritus in 2010. Since 2009 he has been Director of Teaching & Research at the Faculty of Medical Sciences, Pontificia Universidad Católica Argentina, Buenos Aires.
Dr. Cardinali’s fields of interest include the Physiology and Pharmacology of Melatonin and Biologic Rhythms, and their relationships with Sleep Medicine. The most relevant awards and honors he has received include the John Simon Guggenheim Fellowship, New York (1977), the Curt P. Richter Prize, International Society of Psychoneuroendocrinology (1983), honorary doctorates in Medicine from Complutense University, Madrid, Spain (1991) and the University of Salamanca, Spain (1998), and membership in the Royal Academy of Medicine, Spain (1991). In 2007 he was awarded the Scopus Prize, Elsevier, Amsterdam, for being the most-cited Argentine scientist in biomedicine, and the Argentine Government’s Bernardo Houssay Award. In 2008 he received the Aaron B. Lerner Pioneer Award in Recognition of Outstanding Contributions to the Field of Melatonin Research, Federation of American Societies for Experimental Biology (FASEB).