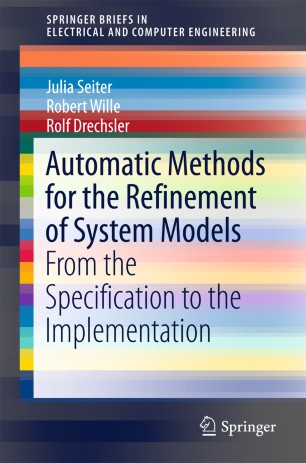 Automatic Methods for the Refinement of System Models

From the Specification to the Implementation

This book provides a comprehensive overview of automatic model refinement, which helps readers close the gap between initial textual specification and its desired implementation. The authors enable readers to follow two “directions” for refinement: Vertical refinement, for adding detail and precision to single description for a given model and Horizontal refinement, which considers several views on one level of abstraction, refining the system specification by dedicated descriptions for structure or behavior. The discussion includes several methods which support designers of electronic systems in this refinement process, including verification methods to check automatically whether a refinement has been conducted as intended.

Julia Seiter currently works as a software architect at VEMAG Maschinenbau GmbH in Verden, Germany. She received the Diploma degree in computer science from the University of Bremen, Germany, in 2012. In 2015, she received her Dr.-Ing. degree, also from the University of Bremen, after having been with the Group of Computer Architecture for three years. Her research was focused on the design and verification of formal system models.

Rolf Drechsler is head of Cyber-Physical Systems department at the German Research Center for Artificial Intelligence (DFKI) since 2011. Furthermore, he is a Full Professor at the Institute of Computer Science, University of Bremen, since 2001. Before, he worked for the Corporate Technology Department of Siemens AG, and was with the Institute of Computer Science, Albert-Ludwig University of Freiburg/Breisgau, Germany. Rolf Drechsler received the Diploma and Dr. Phil. Nat. degrees in computer science from the Goethe-University in Frankfurt/Main, Germany, in 1992 and, respectively, 1995. Rolf Drechsler focusses in his research at DFKI and in the Group for Computer Architecture, which he is heading at the Institute of Computer Science of the University of Bremen, on the development and design of data structures and algorithms with an emphasis on circuit and system design.