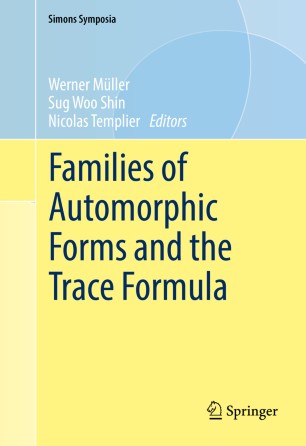 Families of Automorphic Forms and the Trace Formula

Featuring the work of twenty-three internationally-recognized experts, this volume explores the trace formula, spectra of locally symmetric spaces, p-adic families, and other recent techniques from harmonic analysis and representation theory.
Each peer-reviewed submission in this volume, based on the Simons Foundation symposium on families of automorphic forms and the trace formula held in Puerto Rico in January-February 2014, is the product of intensive research collaboration by the participants over the course of the seven-day workshop. The goal of each session in the symposium was to bring together researchers with diverse specialties in order to identify key difficulties as well as fruitful approaches being explored in the field. The respective themes were counting cohomological forms, p-adic trace formulas, Hecke fields, slopes of modular forms, and orbital integrals.

Werner Müller is Professor Emeritus at the Mathematical Institute of the University of Bonn. He is the author of over fifty publications, including articles in Inventiones Mathematicae, Geometric and Functional Analysis, and Communications in Mathematical Physics. His research interests include geometric analysis, scattering theory, analytic theory of automorphic forms, and harmonic analysis on locally symmetric spaces.
Sug Woo Shin is Associate Professor of Mathematics at the University of California at Berkeley. His research is centered on number theory, Shimura varieties, Langlands functoriality, trace formula, and automorphic forms. His work has appeared in many journals, including Inventiones Mathematicae, Mathematische Annalen, and the Israel Journal of Mathematics.
Nicolas Templier is Associate Professor of Mathematics at Cornell University. His work focuses on number theory, automorphic forms, arithmetic geometry, ergodic theory, and mathematical physics. His list of publications include articles in Inventiones Mathematicae, the Ramanujan Journal, and the Israel Journal of Mathematics.