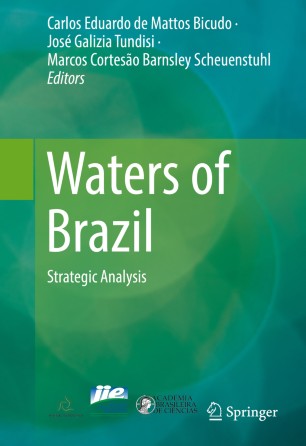 This book is a product of Brazilian Academy of Sciences Study Group about water issue. The water cycle was addressed based on an integrated point of view, aiming at joining technological and ecological solutions and integrating quantitative and qualitative aspects of this important environmental asset. Issues such as the water resources management and irrigated agriculture, water and health, water and economy, conservation and reuse as management tools, water in the Brazilian semi arid, water in Amazon, urbanization and water resources, education for the sustainability of water resources, groundwater, availability, pollution and eutrophication of water and science, technology and innovation are of the utmost importance for this exact moment in Brazil, and particularly to the State of Sao Paulo. Addressing these issues will undoubtedly contribute towards a sustainable management of water resources trough the coordinated work of different fields of science, progressing a systemic view about water, that would then finally allow management professionals the possibility of an integral action in anticipating problems and thus anticipate solutions.

Graduate in Natural History, Universidade de São Paulo (USP, 1962). Master of Science, Michigan State University, East Lansing, Michigan, USA (1965). Doctor of Science-Botany, USP (1973). Post-doctor at the University of Montana, Bigfork, Montana, USA (1977-1978) and at the University of Alabama, Tuscaloosa, Alabama, USA (1994). Worked as a researcher (Scientific Researcher) at the Instituto de Botânica, São Paulo State Department of Environment (1963-2003) conducting studies on the taxonomy and ecology of freshwater algae, and where continues until today after retirement as an Associate Researcher. Published 162 articles in pier reviewed Brazilian and foreign scientific journals, 16 chapters in books edited in Brazil and abroad, 18 books and translated to Portuguese (together with Dr. Jefferson Prado) the International Code of Botanical Nomenclature (Saint Louis and Vienna editions). Was the director for 38 Master of Science Theses and 36 Doctoral Dissertations at Brazilian and South American Universities. Is an Honorary Professor at the Universidad Nacional de Trujillo and the Universidad Nacional de la Amazonía Peruana, both in Peru. Received the Distinguished Member title by the Sociedade Botânica do Brasil and the Associação Brasileira de Limnologia. Is a Full Member of the Brazilian Academy of Sciences. His research is conducted along two lines: (1) taxonomy of freshwater algae, mainly of desmids and (2) phytoplankton ecology of reservoirs. Editorial Board Member of several Brazilian scientific journals and others from abroad (Chile, Germany, Mexico, USA). Has more than 300 presentations which included conferences and round-table discussions in national and international meetings.

Graduate in Natural History, University of São Paulo (USP 1962), Master in Oceanography, University of Southampton, England (1966) and Doctor of Science-Botany, University of São Paulo (USP 1969). Presently Full Professor (retired) at University of São Paulo and works in the Graduate Program of the São Carlos Federal University guiding master and doctoral students. President of the International Institute for Ecology and Environmental Management Association (IIEGA) and a researcher at the International Institute for Ecology (IEE). Invited professor at the University of São Paulo Institute for Advanced Studies. Full Professor at the Feevale University (Novo Hamburgo, RS) working at the Graduate Program of Environmental Quality, guiding master and doctoral students and teaching the Theoretical Ecology and Environmental Monitoring courses. Full Member of the Brazilian Academy of Sciences and of the Ecology Institute – Excellence in Ecology faculty (Germany). Specialist in Ecology and Limnology with emphasis on Management and Restoration of Aquatic Ecosystems. Consultant in 40 countries in different areas of Limnology, management of water resources, recovery of lakes and reservoirs and the planning and optimization of reservoir multiple uses. Presently directs a worldwide international program for capacitation of water resources managers for IAP (InterAcademy Pannel) that represents 100 Science Academies. Consultant for various Water Resources Management projects of the International Institute for Ecology and Environmental Management Association. Published 30 books and has l in press. Published 320 scientific papers and earned awards in Brazil and abroad. Guided 40 Master and 35 Doctoral students in Ecology, Limnology, Oceanography, Water Resources Management and Environmental Management. President of CNPq, Brazil (1995-1999) and counsellor of the Minister of Science and Technology Ronaldo Sandenberg from 1999 to 2001. Was President of the Millenium Institutes Program of the Ministry of Science and Technology. In 1999 founded the Secretariat of Science, Technology and Economical Development of the Municipality of São Carlos.

Economist graduated in 1988 from the State University of Rio de Janeiro. Later obtained his Master’s degree at the same university and then went for a Ph.D. at the Federal University of Rio de Janeiro. For many years, worked at the State University of Rio de Janeiro, focusing on Higher Education Policies and Funding of Higher Education in Latin America. Also worked for the Inter-Union Department for Socioeconomic Studies and Statistics, where developed studies on the Brazilian national financial system. He also served as an adviser to the Rector of the State University of Rio de Janeiro. Throughout his professional career, he has dedicated much attention to institutional capacity building and networking. In 2000, he was invited to help organize the Office of International Affairs of the Brazilian Academy of Sciences. Within the Office, he took responsibility over the Americas, playing a role in the structuring of the Inter-American Network of Academies of Sciences (IANAS), where he served as Executive Director from the establishment of the network up until 2010. When in 2004 the Brazilian Academy of Sciences was designated lead Academy to the Water Programme of the InterAcademy Panel on International Issues (IAP), he served as Programme Director. In addition to the work he develops within the international scenario of the Brazilian Academy of Sciences, he also plays an active role in the coordination of several national programs and initiatives, most of these in the areas of Science Education, Health and Environmental Issues. Much of his work presently focusses in the development of Science-Policy and Science-Business interfaces.