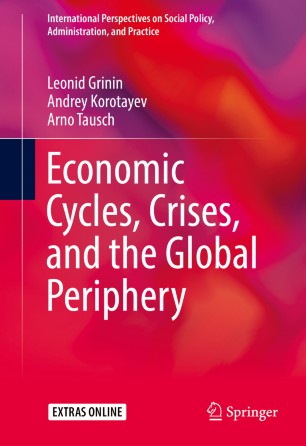 This thought-provoking monograph analyzes long- medium- and short-term global cycles of prosperity, recession, and depression, plotting them against centuries of important world events. Major research on economic and political cycles is integrated to clarify evolving relationships between the global center and its periphery as well as current worldwide economic upheavals and potential future developments. Central to this survey are successive waves of industrial and, later, technological and cybernetic progress, leading to the current era of globalization and the changes of the roles of both Western powers and former minors players, however that will lead to the formation of the world order without a hegemon. Additionally, the authors predict what they term the Great Convergence, the lessening of inequities between the global core and the rest of the world, including the wealth gap between First and Third World nations.

Among the topics in this ambitious volume:

· Why politics is often omitted from economic analysis.

· Why economic cycles are crucial to understanding the modern geopolitical landscape.

· How the aging of the developed world will affect world technological and economic future.

· The evolving technological forecast for Global North and South.

· Where the U.S. is likely to stand on the future world stage.

Economic Cycles, Crises, and the Global Periphery will inspire discussion and debate among sociologists, global economists, demographers,  global historians, and futurologists. This expert knowledge is necessary for further research, proactive response, and preparedness for a new age of sociopolitical change.


Leonid E. Grinin, Ph.D. is research professor and the director of the Volgograd Center for Social Research, as well as the deputy director of the Eurasian Center for Big History & System Forecasting and senior research professor at the Institute for Oriental Studies of the Russian Academy of Sciences in Moscow. He is the Editor-in-Chief of the journal Age of Globalization (in Russian), as well as a co-editor of the international journals Social Evolution & History and the Journal of Globalization Studies. Dr. Grinin is the author of more than 360 scholarly publications in Russian and English, including 25 monographs.
Andrey V. Korotayev, Ph.D. is head of the Laboratory for Destabilization Risk Monitoring of the National Research University Higher School of Economics, senior research professor of the Oriental Institute and Institute for African Studies, Russian Academy of Sciences, senior research professor of the International Laboratory for Political Demography of the Russian Presidential Academy of National Economy and Public Administration, as well as a professor at the Faculty of Global Studies of the Moscow State University. He has authored and co-authored over 300 scholarly publications.

Arno Tausch, Ph.D. is adjunct professor of political science at Innsbruck University and associate professor of economics, Corvinus University, Budapest. He also served as an Austrian diplomat abroad and was counselor for labor and migration at the Austrian Embassy in Warsaw, 1992–1999. He authored or co-authored books and articles for major international publishers and journals, among them seventeen books in English, two in French, eight books in German, and over eighty articles in peer-reviewed journals.