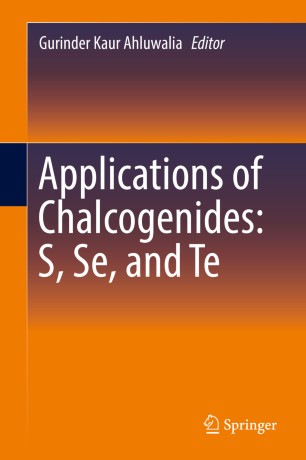 This book introduces readers to a wide range of applications for elements in Group 16 of the periodic table, such as, optical fibers for communication and sensing, X-ray imaging, electrochemical sensors, data storage devices, biomedical applications, photovoltaics and IR detectors, the rationale for these uses, the future scope of their applications, and expected improvements to existing technologies. Following an introductory section, the book is broadly divided into three parts—dealing with Sulfur, Selenium, and Tellurium. The sections cover the basic structure of the elements and their compounds in bulk and nanostructured forms; properties that make these useful for various applications, followed by applications and commercial products. As the global technology revolution necessitates the search for new materials and more efficient devices in the electronics and semiconductor industry, Applications of Chalcogenides: S, Se, and Te is an ideal book for a wide range of readers in industry, government and academic research facilities looking beyond silicon for materials used in the electronic and optoelectronic industry as well as biomedical applications.

Gurinder Kaur Ahluwalia is a lead instructor at the Department of Physics at College of the North Atlantic (CNA), Labrador West Campus in Canada since August 2007. Gurinder received her PhD in Physics with specialization in amorphous semiconductors (chalcogenides) from the Department of Physics and Astrophysics at Delhi University in India in 1992. Thereafter she pursued active research on materials including chalcogenides and silicon at institutions across the globe. Coupled with 20+ years of professional experience in teaching and research, and more than 65 publications in international arena on investigation of novel materials as well as a book chapter on ‘Triblock Polymer Colloidal Nanoparticles”, Gurinder acquired top rated skills  in sophisticated technologies such as; Synchrotron Beam line, Thin Film Technologies MBE, Photo-CVD, Thermal evaporation, Electron beam), Differential Scanning Calorimetry, UV-VIS-NIR Spectroscopy, Atomic force Spectroscopy, Electron Microscopies, Dielectric, Dark and photoconductivity measurements, cell designing for conductivity and dielectric measurements. Her Research Interests are focused on designing and investigation of novel materials for photovoltaics, non-linear optics devices, polymers, data Storage devices and biomaterials. Her research assignments include visiting professor at Institute for Molecular Science, Okazaki, Japan (1993), visiting scientist-University of Palermo, Italy (1993-1994), Monbusho postdoctoral fellowship-Toyohashi University of technology (1995-1996), visiting scientist (2003 and 2004)- Science University of Tokyo, JSPS (Japan Society for Promotion of Science) visiting professor (2003)-Osaka City University, Japan. She taught Physics at undergraduate and postgraduate levels at Delhi University (1992-1993) and Guru Nanak Dev University (GNDU) in Amritsar, India (1996-2005) and pursued research on materials, polymers and surfactants. In 2005 she moved to Canada along with her family and was accepted as a visiting scientist at the University of Western Ontario for two years. There she worked on second order non-linear properties using lasers and confocal microscopy and structural investigations of chalcogenides using the synchrotron facility at Canadian Light Source. At College of the North Atlantic, Gurinder teaches University Transfer courses and has established the first research Laboratory in the region of Labrador West - Materials and Nanotechnology Research Laboratory, with support from Provincial and Federal agencies and is pursuing research on design and development of materials and devices. Dr. Ahluwalia is an experienced researcher with a strong background of working in international and intercultural environment. She has been actively participating in international conferences and has served on organizing committees of several National and International events across Asia, Europe and North America. She is an active member of several international professional organizations, such as, Canadian Association of Physicists, Materials Research Society, Chalcogeniders Forum, American Ceramic Society and Life member- Semiconductor Society of India. On the non-academic front she pursues hobbies, such as, sports, music and visual arts. Along with her teaching tenure at GNDU, she organized Indo-Japanese concerts at the University and colleges in Amritsar.