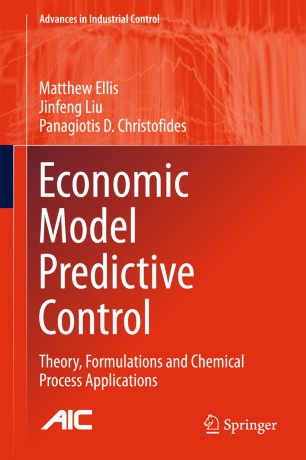 The proposed methods employ a variety of tools ranging from nonlinear systems analysis, through Lyapunov-based control techniques to nonlinear dynamic optimization. The applicability and performance of the proposed methods are demonstrated through a number of chemical process examples.

In addition to being mathematically rigorous, these methods accommodate key practical issues, for example, direct optimization of process economics, time-varying economic cost functions and computational efficiency. Numerous comments and remarks providing fundamental understanding of the merging of process economics and feedback control into a single framework are included. A control engineer can easily tailor the many detailed examples of industrial relevance given within the text to a specific application.

The authors present a rich collection of new research topics and references to significant recent work makingEconomic Model Predictive Control an important source of information and inspiration for academics and graduate students researching the area and for process engineers interested in applying its ideas.

Dr. Liu received the BS and MS degrees in Control Science and Engineering from Zhejiang University in 2003 and 2006, respectively. He received the PhD degree in Chemical Engineering from the University of California, Los Angeles in 2011. Before joining the University of Alberta in April, 2012, Dr. Liu was a postdoctoral researcher at the University of California, Los Angeles. His research interests are in the general areas of process control theory and practice with emphasis on model predictive control, networked and distributed control, process monitoring, and real-time control of chemical processes and energy generation systems.

Professor Panagiotis Christofides obtained his PhD from the University of Minnesota in 1996 and he has been a professor at the University of California, Los Angeles since 2004. He is a fellow of various professional societies:  the American Association for the Advancement of Science, the International Federation of Automatic Control and the IEEE. He is the author of numerous research papers, as well as two previous books published by Springer and has much experience of conference organization having served on various boards at various times, among them as the AIChE Director on the American Automatic Control Council.

“The reviewed book deals with stability and performance analysis of nonlinear control systems under economic model predictive control (EMPC). … the book builds a bridge between the theory and practice and provides an excellent balance between theoretical results and their application-specific implementation.” (Petro Feketa, zbMATH 1405.93004, 2019)