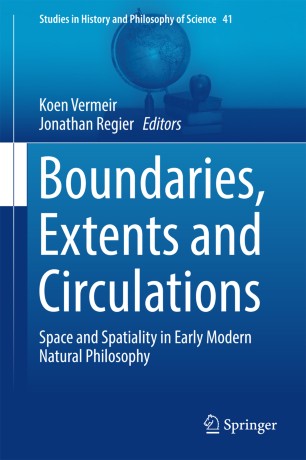 Part of the Studies in History and Philosophy of Science book series (AUST, volume 41)

This volume is an important re-evaluation of space and spatiality in the late Renaissance and early modern period. History of science has generally reduced sixteenth and seventeenth century space to a few canonical forms. This volume gives a much needed antidote. The contributing chapters examine the period’s staggering richness of spatiality: the geometrical, geographical, perceptual and elemental conceptualizations of space that abounded. The goal is to begin to reconstruct the amalgam of “spaces” which co-existed and cross-fertilized in the period’s many disciplines and visions of nature. Our volume will be a valuable resource for historians of science, philosophy and art, and for cultural and literary theorists.

Koen Vermeir is an Associate Research Professor (CR1) in the HPS Laboratory SPHERE (UMR 7219) at the Centre national de la recherche scientifique (CNRS). As a historian and philosopher, he has contributed to a wide array of fields. His main interests are in the history of the imagination and in the interaction between religion, science and technology. Additionally, he works on historiographical and methodological topics and on science policy. He is currently a member of the Global Young Academy. After studies in theoretical physics, philosophy and history of science, in Leuven, Utrecht and Cambridge, he held research positions at the Fund of Scientific Research-Flanders, the Max-Planck-Institute for the History of Science, Harvard University, and Harvard’s Radcliffe Institute for Advanced Studies. Vermeir was visiting fellow at Cambridge University and Cornell University, and visiting professor at the ETH Zürich. Vermeir is founder of and responsible for the research unit Histoire culturelle et interdisciplinaire des techniques (SPHERE) ; co-responsible for the research unit Recherches interdisciplinaires en histoire et philosophe des sciences (SPHERE) ; and former founding director of LIPSS, a science studies platform at the University of Leuven (Belgium). He is currently member of the editorial board of the journals Journal for Early Modern Studies, the journal Society and Politics and the journal Artefact : Histoire & techniques, and the book series Studies in History and Philosophy of Science and International Archives of the History of Ideas. His work has been published in six different languages.

Jonathan Regier is currently a Postdoctoral Fellow at the Jockey Club Institute for Advanced Study, The Hong Kong University of Science and Technology. He is a chercheur associé with the HPS Laboratory SPHERE (UMR 7219) at the Centre National de la Recherche Scientifique (CNRS). He did his graduate work at Université Paris Diderot. His thesis and recent publications have focused on natural philosophy and the mathematization of nature during the sixteenth and seventeenth centuries. He is also pursuing research on the social integration and diffusion of new technologies.

“Book claims to set forth the variety of uses and concepts of space throughout a diversity of domains rather than propounding a linear and canonical historical narrative, it clearly fulfils its promise. … book appropriately confirms that the notion of space … was gradually called on to take, by the seventeenth century, much richer and diverse applications and meanings, and that it contributed in many ways, sometimes quite indirectly and unexpectedly, to the development of modern scientific thought and methods.” (Angela Axworthy, Metascience, January, 2018)
“This book examines changing views of space in the later end of the Renaissance and the early modern period. … This work is for scholars interested in details concerning the treated figures and subjects and is not intended for general readers. Several contributions include illustrations … . Summing Up: Recommended. Graduate students and faculty.” (J. W. Dauben, Choice, Vol. 54 (9), May, 2017)
Buy options